(CNN) — A Florida teenager whom police want to question in connection with the suspected death of his grandmother was detained Friday by US agents near the border with Canada, officials said.

Authorities took the 15-year-old into custody on suspicion of grand theft auto. His grandmother, 53, is missing but authorities believe her remains were found Friday in the backyard of a Florida home. They are awaiting a medical examiner to identify the body.

“We need to interview him to discuss what happened at the home,” Ron Lendvay, director of the department of investigations at the Jacksonville Sheriff’s Office, said Friday, hours before the youth was caught more than 1,000 miles from his home in Neptune Beach. 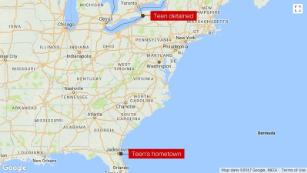 The boy was detained Friday night after he made a U-turn in a 2015 Dodge Dart on the Peace Bridge in Buffalo, New York, said Aaron Bowker, a spokesman for the Buffalo field office of US Customs and Border Protection.

He never made it to the Canadian side, Bowker said.

Police had been looking for the boy, his grandmother and her Dodge since Wednesday when the youth’s father returned from a trip and said he found guns missing from a safe that had been broken into.

His son and mother, who were supposed to pick him up at an airport, were missing.

The boy was later spotted in Pennsylvania, police said.

He is being held by police in Buffalo.

McALLEN, Texas (Border Report) -- A confluence of immigration-related events are creating a surge of asylum-seekers in South Texas during this dangerous COVID-19 pandemic, and a South Texas lawmaker says the situation is increasing so rapidly that additional U.S. Border Patrol agents are being sent en masse to the region to assist, Border Report has learned.

In the Gulf Coast city of Brownsville, 108 migrants released during the past month have shown to be carrying the coronavirus, U.S. Rep. Henry Cuellar, D-Texas, said Wednesday. And he says that is putting the South Texas border community, as well as the volunteers who help them, and the border agents, at risk.

(MYSTERY WIRE) -- A truly mysterious series of lights were seen by people in the Las Vegas valley earlier this week.

The lights, as seen in several videos and photographs, appeared over Las Vegas around 7:30 p.m. Monday, March 1. People on different sides of the city have reported seeing them.

HOUSTON (CW39) With March being National Nutrition Month and obesity possibly tripling the risk of hospitalization due to COVID-19, the personal-finance website WalletHub today released its report on 2021's Most Overweight and Obese Cities in the U.S..

In order to call attention to the communities where weight-related problems are most prevalent, WalletHub compared 100 of the most populated U.S. metro areas across 19 key metrics.

Growth after the freeze

Texas drivers paying a lot of cash for bad roads

Porch package thief on the loose in NW Harris County

More and more Millennials considering going back to school