PARIS -- France began voting for a new president Sunday, following a volatile campaign period that was overshadowed in its final days by a terror attack on police.

Polls opened in the morning for France's 47 million registered voters under tightened security, with the country still jittery just two days after the attack on a police bus in the heart of Paris, which left one officer dead.

The country is sharply divided -- with the latest polls suggest the results are too close to call. 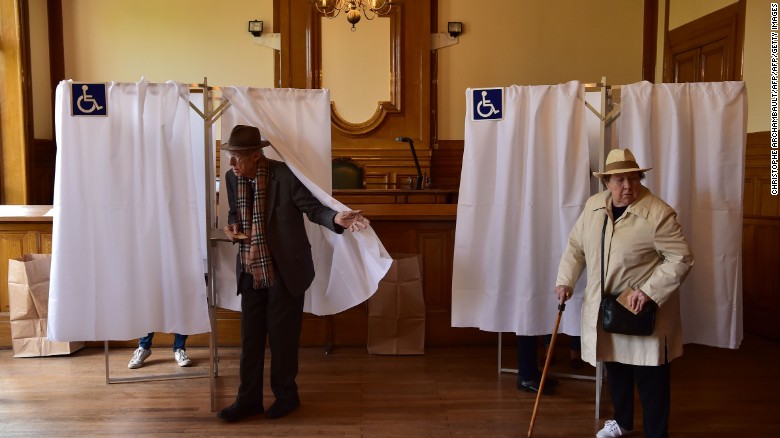 With 11 names on the ballot, no one candidate is expected to win an outright majority, and only four leading contenders are seen as having a realistic prospect of making it through to the second-round vote in May.

The frontrunners are far-right National Front leader Marine Le Pen, scandal-hit conservative François Fillon, centrist newcomer Emmanuel Macron and far-left wildcard Jean-Luc Mélenchon. The top two in Sunday's vote will face off on May 7 in a second -- and final -- round of voting.

Benoit Hamon is the mainstream left-wing Socialist Party nominee but polls suggest he has struggled to gain traction.

That means France could end up with a choice between candidates from the far-left and far-right, or a far-right stalwart facing off against a political novice.

Polls opened at 8 a.m. local time (2 a.m. ET) Sunday across the country, and by midday, around 30% of voters had cast their ballots. Initial results expected in the evening. Most polls will close at 7 p.m. -- while polls in some urban areas will remain open until 8 p.m. (2 p.m. ET).

The election is being closely watched as a bellwether of populist sentiment in Europe. Populists have shaken up the political landscape across the continent, but Austria, the Netherlands and Italy have in recent elections resisted voting populist candidates into power.

But what is clear is that the country is divided and that there is a significant appetite for change.

In Le Pen's heartland in Hénin-Beaumont, where she cast her vote Sunday, a shouting match erupted between two voters, a man supporting Mélenchon and a woman backing Le Pen.

In Paris, 59-year-old electrician Akermann Frederic told CNN it was time for change.

"We have been hit by attacks and a lot has happened these past two years and now we've had enough. A change needs to happen," he said.

Laure Granval, 26, fashion designer. "I decided 3 weeks ago who I was going to vote for because I really think we've taken a wrong turn in France. People are being manipulated and the political discourse has become so reactionary. We need to remember that we are all human and we shouldn't fight each other. I'm voting for someone who I think represents my views. We can't give into divisiveness. I don't have the same religious beliefs as a lot of people in France and I worry that I'll be thrown out one day." #presidentielles

Laure Granval, a 26-year-old fashion designer, said she felt that France had taken a wrong turn.

"People are being manipulated and the political discourse has become so reactionary. We need to remember that we are all human and we shouldn't fight each other. I'm voting for someone who I think represents my views. We can't give into divisiveness," she said.

Security was already high on the candidates' political agenda before the attack in Paris on Thursday.

Several of the main candidates on Friday canceled events for the final day of campaigning, instead making televised statements to talk tough on security and vow a crackdown on ISIS, which claimed Thursday's attack. 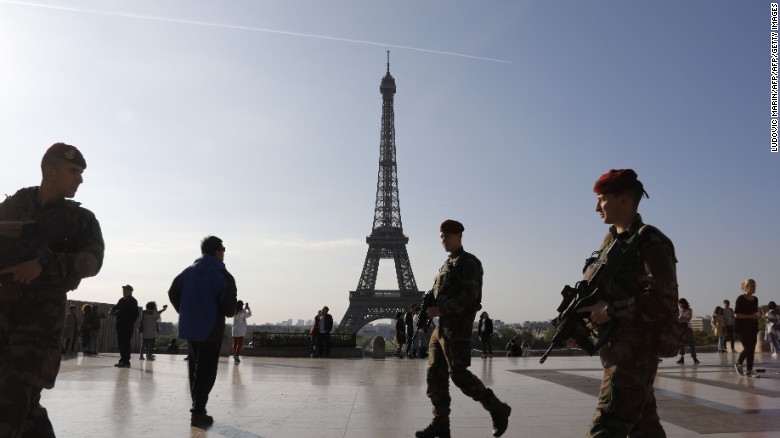 President Francois Hollande, who cast his vote in Tulle in southwestern France, acknowledged that these were troubled times for France.

"We are in a period, but this period is neither recent nor over, so we have to mobilize a lot of resources, in particular for the two days of vote for the presidential election and then the legislatives. And for the French I think it is the best message they can send, it's to show that democracy is stronger than anything," he said.

Hollande made the unusual decision not to run for a second term as his approval ratings remained in the doldrums over the years.

France suffered the worst terror attack on its soil under Hollande's watch, with 130 people killed in the Paris attacks in November 2015.

Aside from security, immigration and the economy are top issues for voters. Many think current immigration policies have exacerbated France's unemployment problems and contributed to the deadly terror attacks of the past couple of years.

Le Pen: The far-right candidate told supporters in the run-up to the vote that if elected, she would put a moratorium even on legal immigration to the country, as well as closing "Islamist" mosques and expelling radicals. She has also vowed that if she wins, France will exit the European Union, as well as the border-free Schengen area.

Macron: This 39-year-old former economy minister hopes to take the centrist path to the Elysee Palace, gathering support from left and right with promises to boost the economy and improve security. His party, "En Marche!" which was only created in September, now has more than 200,000 members and his meetings have attracted vast crowds.

But he has has never held elected office and his lack of experience, lack of an established party and his youth could count against him.

Fillon: The mainstream Republican candidate, was initially a frontrunner but his campaign stumbled thanks to a scandal over claims he paid his wife and children for work they did not do. He denies any wrongdoing. He has promised reforms to the French state and cuts to public spending, while boosting security.

Mélenchon: The far-left candidate has seen his popularity surge in recent weeks, following his impressive performances in the presidential television debates. But the 65-year-old's policies -- which include withdrawing from NATO and the International Monetary Fund, and renegotiating EU rules -- are unlikely to appeal to all voters.

University of Louisville kicked three soccer players off its team and suspended three others, after they hosted a COVID-19 party. The university's men's and women's soccer teams, field hockey team and volleyball team had to cancel their workouts after 29 COVID cases were reported.

Members of the impacted sports teams, who do not test positive, may resume team workouts on Monday.

SAN ANTONIO (KAMR/KCIT) — Whataburger, with its iconic orange brand, is taking its food on the road.

The company is celebrating its 70th birthday with the launch of a state-of-the-art Whataburger Food Truck.

PHOTOS: ‘Edward Scissorhands’ home in Lutz up for sale