(CNN) — A Georgia police officer was killed and two sheriff’s deputies were wounded Friday while trying to make an arrest, authorities said.

The shooting occurred in Locust Grove, a small town about 35 miles south of Atlanta, when the two Henry County deputies went to a residence to serve a warrant for failure to appear in Locust Grove Municipal Court, Henry County Sheriff Keith McBrayer said at a news conference. 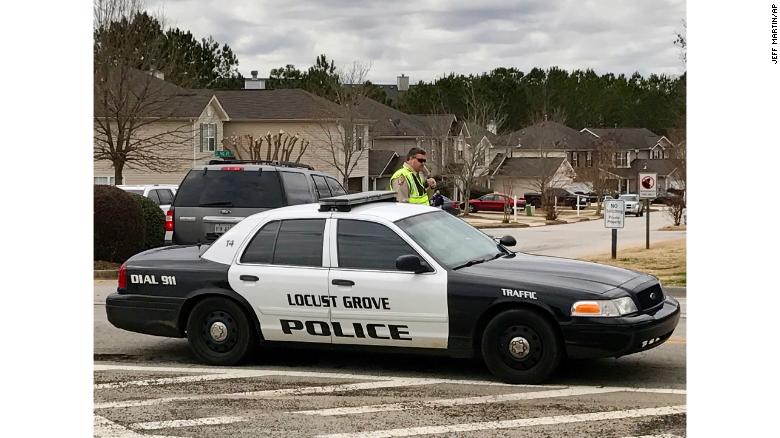 The deputies called for backup and a Locust Grove police officer arrived.

While trying to make the arrest, an altercation occurred during which the three officers and the suspect were all shot, McBrayer said. McBrayer did not say who opened fire.

The wounded officers were identified as Michael D. Corley and Ralph Sidwell Callaway.

One deputy was in serious condition and underwent surgery at Atlanta Medical Center and the second deputy was in fair condition in the same hospital, McBrayer said. The GBI said Corley was released from the hospital.

The GBI identified the suspect as Tierra Guthrie, 39.

UPDATE: The Locust Grove Police Officer has died. Our thoughts and prayers are with the officer's family, friends and the entire department.

Eight other law enforcement officers have died of gunfire this year, according to the Officer Down Memorial Page.

On Wednesday, David Sherrard of the Richardson, Texas, police was killed while responding to a shots fired call at an apartment complex. A suspect is in custody.

On Monday, Micah Flick of the sheriff’s office in El Paso County, Colorado, was killed while investigating a vehicle theft. Three other law enforcement officers were shot and injured during a struggle with the suspect in Colorado Springs, authorities say. The suspect was killed.

Flick was the third officer killed in Colorado since the beginning of the year.

HENRICO COUNTY, Va. (WJW) — Residents at a senior living community in Tuckahoe, Virginia, joined from their balconies, windows and socially distanced around campus Friday to sing "God Bless America" together.

According to the retirement community, this was an attempt to show support for one another while self-isolating due to the coronavirus outbreak.

COLUMBUS, Ohio (WJW) -- The U.S. Food and Drug Administration has authorized an Ohio company to sterilize thousands of respirator masks for health care workers on the front lines of the coronavirus pandemic.

Battelle, a private non-profit research institute, had previously received partial approval by the FDA, which limited how many masks they could clean each day. That decision didn't sit well with Ohio Governor Mike DeWine. He asked the FDA to reconsider and sought support from President Donald Trump.

(CNN) -- Nothing beats the company of man's best friend as you self-isolate during the coronavirus outbreak. But an ice-cold beer, free at that, comes in at a close second.

Now you can have both because Busch Beer is offering a three months' supply of its beer to 500 people who adopt or foster a dog from Midwest Animal Rescue in Minnesota.

A few showers to start off the week