(CNN) — Gigi Hadid took to Instagram to address the criticism she is facing over her latest Vogue cover.

Vogue Italia’s posted on Instagram the cover photo for the May issue and in it, Hadid appears in a darker skin tone that have some social media users calling her out for blackface. The issue hits newsstands on Friday.

Hadid issued a lengthy statement on her official Instagram account under the “Story” feature in the app.

“Please understand that my control of a shoot 1. is non existent in terms of creative direction. 2. ends completely when I leave set, and anything done to a photo in post is out of my control fully,” she said. 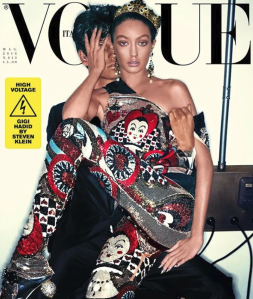 Hadid appears to place the blame squarely on Vogue Italia, which has faced similar accusations of blackface and cultural appropriation in the past. In 2015, Hadid came under fire for wearing an afro on another “Vogue Italia” cover.

“Although I understand what Vogue Italia’s intentions were, it was not executed correctly, and the concerns that have been brought up are valid … Please know that things would have been different if my control of the situation was different,” Hadid said. “Regardless, I want to apologize because my intention is never to diminish those concerns or take opportunities away from anyone else, and I hope this can be an example to other magazines and teams in the future.”

Some Instagram users wrote comments under the Vogue Italia photo criticizing Hadid and the magazine while others defended the model.

The backlash prompted Italia Vogue’s contributing editor at large to issue her own statement on her Instagram account. Patti Wilson, who is black, noted that the photo was for a summer issue and that Hadid was meant to look tan and “nothing more than that.”

“People come in all shades,” Wilson said. “Throughout my career, I’ve championed models of all elasticities and have always fought for diversity in this industry. I celebrate women of all color.”

HOUSTON (CW39) CW39 Anchor Sharron Melton here! We have some stories you'll want to follow throughout the day!

People aren't the only ones being impacted by the wildfires out west. Family pets and livestock are also suffering. They are even organizations that are trying to help them, but, they are being met with some push back and red tape.