ROCKLAND, Mass. — A mother in Massachusetts is warning other parents after her young daughter was badly burned while making a popular DIY project for kids, according to WCVB.

Siobhan Quinn was excited when her daughter Kathleen became interested in making and playing with homemade “slime.”

“I thought it was great. I encouraged it and bought all the stuff. And then when it was gone, I bought more. She was being a little scientist,” Quinn told WCVB.

But last weekend while Kathleen was at a sleepover, she woke up in the middle of the night in excruciating pain. 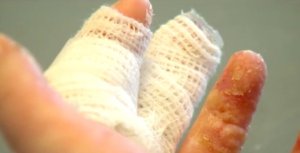 “It felt like really hot and tingly,” Kathleen said.

When Quinn picked her up the next day, she was crying in pain. She took Kathleen to Shriners Hospital where doctors determined the blisters covering her hands were actually second and third-degree burns.

Doctors told Quinn the burns were a result of prolonged exposure to Borax One, one of the main ingredients in homemade slime.

“You just have to really read the packages and know what you’re mixing because there are certain things in the home that are just dangerous,” Dr. Megan Hannon said.

Kathleen is expected to make a full recovery.

WASHINGTON (NEXSTAR) — With President Donald Trump bypassing the nation’s lawmakers and issuing executive orders to defer payroll taxes and replace an expired unemployment benefit, many are wondering where that leaves a second round of direct payments to Americans.

As of now, there's no clear path to making this happen in the foreseeable future.

BEIJING - China on Monday announced unspecified sanctions against 11 U.S. politicians and heads of organizations promoting democratic causes, including Senators Marco Rubio and Ted Cruz, who have already been singled out by Beijing.

Foreign ministry spokesperson Zhao Lijian on Monday said the 11 had “performed badly” on issues concerning Hong Kong, where China has cracked down on opposition voices following its imposition of a national security law in the semi-autonomous southern Chinese city last month.

Facebook CEO Mark Zuckerberg is now worth $100 billion dollars. That makes him part of one of the world's most exclusive clubs, as only two other people have bigger fortunes. Those men are Amazon's Jeff Bezos and Microsoft's Bill Gates. Zuckerberg co-founded Facebook from his dorm room at Harvard in 2004.

At 36-years-old, he's now Facebook's chairman and controlling shareholder, in addition to being its CEO. According to the Bloomberg Billionaires Index, his biggest asset is still his 13% stake in the company.