The government imposed the nightly curfew in an effort to quell unrest following the election, which remains unresolved almost a week later.

The 10-day curfew is in effect from 6 p.m. to 6 a.m. each day. Cargo transport workers, emergency health workers, government workers and people involved with the election and electoral parties are exempt from the curfew, which was announced Friday night.

“The executive decree orders the arrest of any person found outside the circulation hours established by the authorities or who is suspected of causing damage to persons or property,” Jorge Ramón Hernández, coordinating minister of the government, said on national TV.

He ordered all state and local authorities to be at the disposal of the National Police and armed forces. 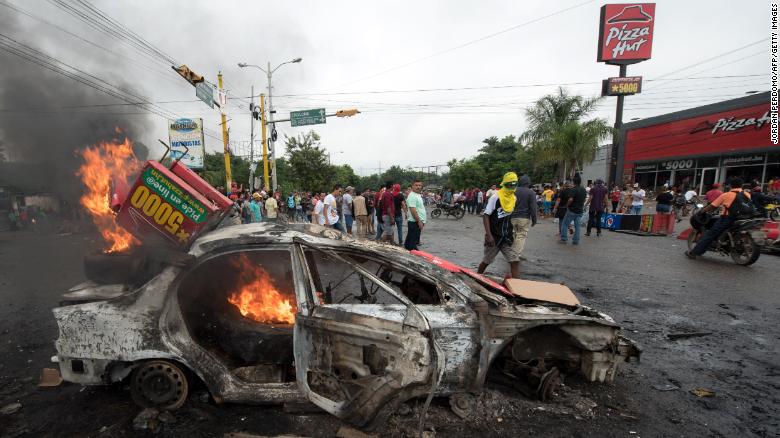 Army and National Police have also been ordered to clear demonstrators or people committing illegal activities from public areas, highways, bridges and private or public buildings.

The Honduran government lifted the curfew in the Caribbean area of Islas de la Bahía, the city of Trujillo and at the city and ancient Mayan ruins of Copán, which is considered one of the most visited attractions in the country.

Why are Hondurans protesting?

Protests erupted in the Central American country Thursday after widespread allegations of voter fraud in the presidential election that took place November 26.

Almost a week after the election, the country still has no officially declared winner, with both sides claiming victory.

With close to 95% of the ballots counted, the gap between the two candidates is less than 2% of the votes, with Hernandez leading the polls. 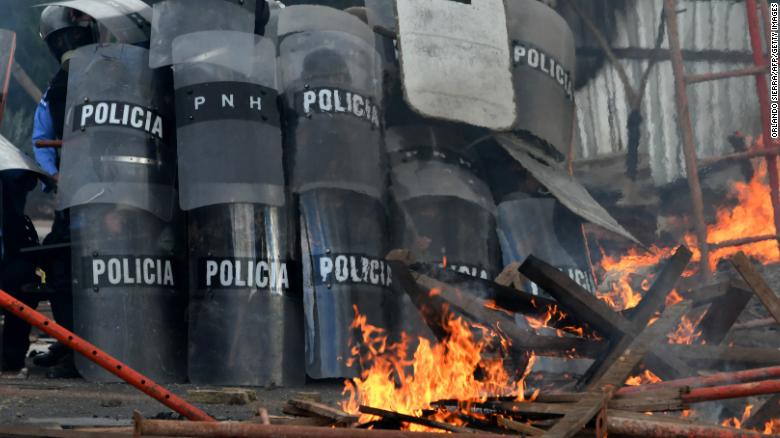 Nasralla backers took to the streets throughout the country, most prominently in Tegucigalpa. Protesters have blocked roads, burned tires, and the National Police reported widespread looting. Protesters have also clashed with security forces, and several people have been injured.

In a statement Friday, the National Police said they detained about 50 people throughout the country who were caught looting.

While the government has said the curfew is in place to maintain law and order in the country, some say it’s a power grab.

In a tweet, Nasralla condemned the curfew and said declaring the “curfew 12 hours a day while processing electoral ballots is the equivalent of a coup d’état in Honduras.”

“I condemn the repression and death that the Honduran people are suffering due to the coup by the president,” Nasralla said.

Heide B. Fulton, Chargé d’Affaires of the US Embassy in Honduras, said in a tweet that “election authorities need to carry vote count to completion freely and transparently, without interference.” She also wished that “all parties remain calm while that process unfolds.”

“There is a process in place to clarify ALL outstanding questions about the contested ballots. The political parties have a positive role to play,” she said on Twitter.

Again, it is vital that every acta is counted, without interference, and that all parties remain calm while that process unfolds.

The Honduran Electoral Commission has not yet announced a winner and is scrutinizing ballots that show irregularities.

The special count of those ballots is supposed to be watched by members of both parties.

That process was due to continue Saturday morning, but the head of the electoral commission, David Matamoros, said the opposition party failed to show.

Instead, the opposition party has called for peaceful street protests on Sunday, saying that the electoral commission has failed to meet their requests.

In a statement, Nasralla’s party had asked the electoral commission for access to ballot boxes, voter databases and voter breakdowns, and it demanded a recount in three areas of the country where turnout was uncharacteristically high.

“Throughout the country the voter participation was 50-55%,” the statement said. It added that the areas of Lempira, la Paz and Intibuca saw a voter turnout of more than 70%.

Voting data available on the electoral commission website shows that in all three areas, Hernandez has a significant lead over Nasralla.

It is unclear when the electoral commission will be ready to declare a winner and many outside observers, such as the Organization of American States and the United Nations, have called on both candidates to wait for the final results before declaring victory.

For his part, Hernandez has called for his supporters to act peacefully and display calm. He has also said he will accept the election results, regardless of the outcome.

WASHINGTON (NEXSTAR) -- Voters in at least three states reported receiving emails that appear to be from a right-wing group threatening to "come after" voters unless they cast their ballot for President Donald Trump.

TAMPA (WFLA) -- While fans of the Tampa Bay Rays and Los Angeles Dodgers were cheering on their teams in Game 1 of the World Series, many others were excited over winning free tacos.

All of America won a free taco, thanks to Taco Bell’s “Steal a base, steal a taco” promotion when Dodgers right fielder Mookie Betts swiped second base during the fifth inning.

The parenting advice website Babycenter.com has just released its annual list of top baby names. As in past years, parents are picking up a newspaper or flipping on television for inspiration and to figure out what to names avoid.