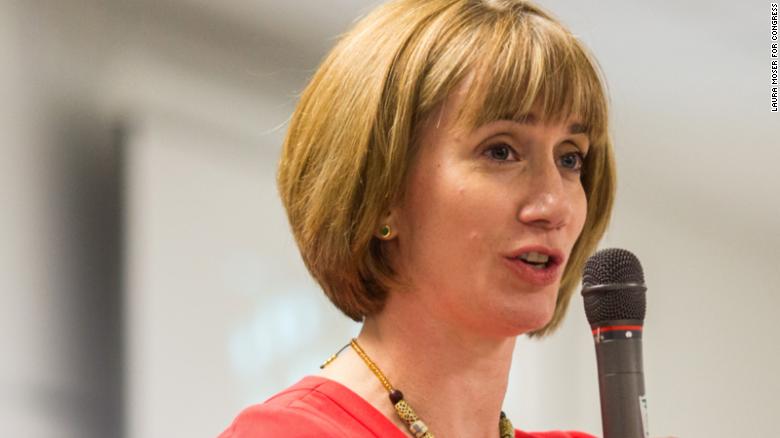 (CNN) — A crowded Democratic House primary in the Houston area has become a stand-in for the broader battle within the party between progressives who backed Bernie Sanders and members of the establishment.

The controversy erupted more than a week ago, when the Democratic Congressional Campaign Committee, the party’s political arm for House races, unleashed a scathing attack against journalist and activist Laura Moser, one of seven candidates in the Texas 7th District Democratic primary to take on Republican Rep. John Culberson this fall.

Now, with two days left before the Texas primary on Tuesday, the infighting has opened wounds within the Democratic Party that never quite healed after the 2016 election, when Sanders supporters accused the Democratic National Committee of tipping the scales in favor of Hillary Clinton.

And the fighting could go on past Tuesday: If none of the four leading candidates top 50%, the top two finishers will advance to a runoff six weeks later.

Central to the DCCC’s case against Moser is a 2014 Washingtonian article in which she wrote that she’d “sooner have my teeth pulled out without anesthesia” than live in Paris, Texas. The committee feared the article was ready-made for scathing attack ads casting Moser as a DC-loving, Texas-loathing carpetbagger — the kind that her campaign might never be able to overcome. Attorney Lizzie Pannill Fletcher, nonprofit executive Alex Triantaphyllis and oncologist Jason Westin are others seen as leading candidates.

“Democratic voters need to hear that Laura Moser is not going to change Washington. She is a Washington insider, who begrudgingly moved to Houston to run for Congress,” the DCCC said on its website as it posted a bundle of research critical of Moser.

But progressive activists were incensed to see the DCCC — which has long been accused of recruiting too many moderate, milquetoast candidates and weighing fundraising potential too heavily in deciding who to back — weigh in with such a heavy hand less than three weeks from the March 6 contest.

“The DCCC’s ridiculous attacks on Laura Moser are why Democrats nationally have lost over 1,100 seats,” said Jim Hightower, an Our Revolution board member. “The people of Texas should be allowed to make their own decisions on who to vote for without the influence of Washington insiders.”

Our Revolution, along with two other progressive groups, Justice Democrats and CREDO, have also launched a petition aimed at DCCC chairman Ben Ray Luján, telling him to “stop attacking progressives in the Democratic Party.”

DNC Chairman Tom Perez, who has said the national party will remain neutral in primaries, also took a shot at the DCCC.

“I wouldn’t have done it,” Perez said on C-SPAN’s “Newsmakers” on Friday.

Moser released her own ad highlighting the controversy Friday, saying the Democratic primary is about “rejecting the system where Washington party bosses tell us who to choose.”

“We tried that before and look where it got us,” she says in the ad, making a clear reference to the party’s 2016 presidential primary.

A longtime ally and adviser to Clinton, Neera Tanden, responded to Moser’s ad on Twitter, writing, “Honestly asking @lcmoser- do you mean this as an attack on @HillaryClinton or are you referencing something else? I’m definitely against party bosses choosing nominees but I don’t know when that last happened.”

In recent days, backlash over the 2014 Washington article written by Moser and highlighted by the DCCC has extended beyond the DCCC.

In it, Moser referred to living “directly next door to a deaf-mute drug addict” — a comment that The Daily Moth, a news outlet for the deaf, highlighted as offensive. Moser apologized for language she said was “extremely inappropriate and insensitive, and I regret it deeply.”

“I try to be an ally, but I am still learning,” she said.

Kandice Webber, an organizer of Saturday’s March for Black Women in Houston — of which Moser was a sponsor — also took issue with Moser’s 2014 article, in which she argued that Washington residents should get over their city’s high housing prices. She told BuzzFeed’s Alexis Levinson that in the article, Moser was “completely tone deaf and it just, it reeked of white privilege.”

She said Moser “has no business” representing Texas’s 7th District.

“If I had read that article this time last week, she would not be sponsoring,” Webber said. “I am a little uncomfortable with it because I think that at this point, she needs to answer for what she does.”