(CNN) — An Israeli F-16 fighter jet crashed Saturday in northern Israel after coming under “massive anti-aircraft fire” from Syrian forces, according to the Israeli army.

The incident came after an Israeli combat helicopter successfully intercepted an Iranian unmanned aerial vehicle that had been launched from Syria, the Israel Defense Forces said.

Both pilots aboard the Israeli jet are safe, the Israeli army said, although one pilot was severely injured as a result of an emergency evacuation from the plane. 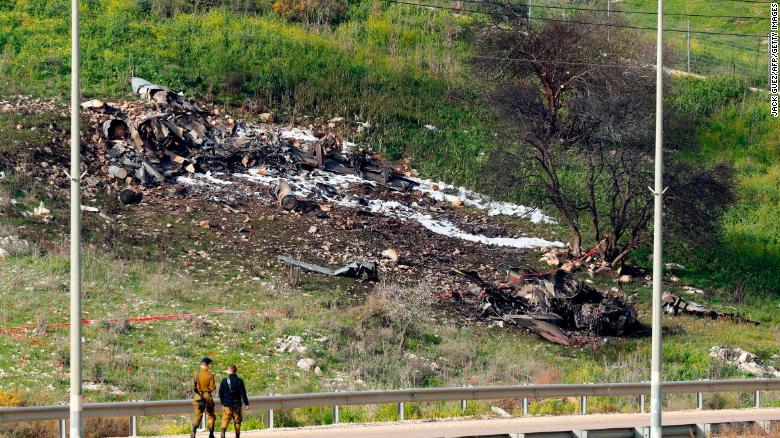 After the plane came down, Israeli forces attacked 12 targets in Syria, including three aerial defense batteries and four targets described as Iranian, the IDF said.

An IDF statement described the four Iranian targets as “part of Iran’s military establishment in Syria.”

The statement concludes: “The IDF will act determinately against such severe violations of Israeli sovereignty by Iran and Syria and will continue to act as necessary.”

The state-run Syrian Arab News Agency reported that Syrian air defense forces had responded Saturday to what they called Israeli “aggression” by hitting more than one Israeli plane following attacks on a Syrian military base by Israeli jets.

“The Israeli enemy entity early morning at dawn conducted a new aggression against one of the military bases in the central region,” SANA said, citing a military source.

IDF spokesman Lt Col Jonathan Conricus told CNN that one Israeli aircraft came down, with all others returning safely to base. The cause of the F-16 crash is being investigated, Conricus said, adding that the IDF has not determined if anti-aircraft fire hit the jet.

The assertions by Israel regarding the downed Iranian drone “are too ridiculous to be addressed,” Iranian Foreign Ministry Spokesman Bahram Qassemi said Saturday, as quoted by state-run Press TV.

“The Islamic Republic of Iran has advisory presence in Syria at the request of the country’s legitimate and constitutional government,” Qassemi said.

“The government and army of Syria as an independent country have a legitimate right to defend (the country’s) territorial integrity and counter any type of foreign aggression.”

Meanwhile, Russia’s Foreign Ministry said that “the latest developments and attacks on Syria were viewed with serious concern” and that the loss to Syria and damage resulting from them were being examined.

“We urge all parties involved to exercise restraint and to avoid any actions that could lead to an even greater complication of the situation,” the ministry said. “We consider it necessary to unconditionally respect the sovereignty and territorial integrity of Syria and other countries of the region.”

IDF: Drone on a mission inside Israel

Giving more details on how events unfolded, the IDF’s Conricus told CNN an Iranian unmanned drone had been dispatched on a specific mission inside Israel.

The drone entered Israeli airspace at 4:50 a.m. local time Saturday after being tracked by the Israeli military from its launch from the Iranian T-4 command center near Palmyra, Syria, Conricus said. The IDF intercepted it with an Apache attack helicopter, he said, and the remains of the drone fell north of the Israeli town of Beit She’an.

Conricus declined to give details on the drone’s presumed mission or whether it was armed. He confirmed it was the first time an Iranian drone had crossed into Israeli airspace since the start of the Syrian civil war in 2011.

As the Israeli planes came under attack, two F-16 pilots decided to eject, and their plane crashed in Israel’s Galilee region, Conricus said.

The Israeli air force then launched its attack on 12 further targets inside Syria, Conricus said, all of which were hit.

“We are willing, prepared, and capable to exact a heavy price on anyone that attacks us. However, we are not looking to escalate the situation,” Conricus posted on his official Twitter feed.

The regime said it intercepted the missiles and destroyed most of them, according to SANA.

Tensions between Israel and Syria have escalated in recent months.

Israel has conducted dozens of strikes inside Syrian borders to defend what it calls its red lines, and to prevent what it says is Iran’s proxy Hezbollah — fighting alongside the Syrian regime — from acquiring advanced weaponry.

Authorities also accused Syria in November of violating the 1974 ceasefire agreement by “conducting construction work” in the northern part of the Golan Demilitarized Zone.

The United Nations called Tuesday for a monthlong humanitarian ceasefire throughout Syria as fighting escalates in certain areas.

Syrian President Bashar al-Assad’s regime recently intensified airstrikes on rebel-held areas such as the northwestern Idlib province, prompting tens of thousands of civilians to flee their homes, according to UN officials.

A Russian warplane was shot down last week in Idlib.

Virtual reality shows what coronavirus does to your lungs