(CNN) — At least 30 people were confirmed killed and several others injured when a bus collided with a truck on a road in central Kenya, the country’s President said.

The crash happened early Sunday as the Nairobi-bound bus was traveling along the Nakuru-Eldoret highway.

In a statement, President Uhuru Kenyatta expressed his condolences to the families and friends of passengers involved in the road accident at Migaa near Molo, a town in Nakuru County north of Nairobi.

“The President said it was unfortunate that many Kenyans have continued to lose their lives in road accidents, which can be avoided,” the statement read. 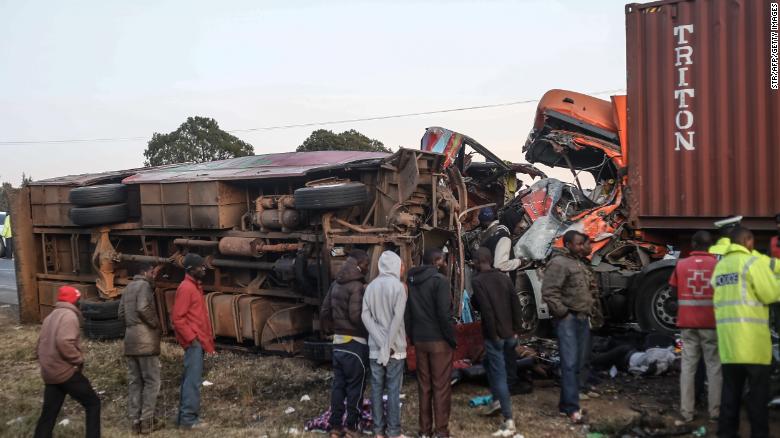 Twenty-eight bodies had so far been recovered from the bus wreckage as well as the body of the truck driver, according to the Kenya Broadcasting Corporation (KBC).

Rescue operations continued at the scene of the accident, with injured passengers transported to Molo Sub-County Hospital and Nakuru Level Five Hospital for treatment, KBC reported.

President Kenyatta wished the injured a quick recovery and called upon drivers to be vigilant on the roads over the holiday period.

“Let us all be responsible this festive season, and more so, those of us who are driving,” Kenyatta said, according to the statement.

The announcement came Monday after the U.S. government told the automaker it had to recall 6 million of the vehicles in the U.S.

About 1 million Americans a day packed airports and planes over the weekend even as coronavirus deaths surged across the U.S. and public health experts begged people to stay home and avoid big Thanksgiving gatherings.

And the crowds are only expected to grow. Next Sunday is likely to be the busiest day of the holiday period.

AUSTIN (KXAN) — The first Texans to receive the COVID-19 vaccine will be health care workers and other vulnerable populations. Gov. Greg Abbott expects the first vaccine shipments to come as early as December, according to a release from Abbott's office and the Texas Department of State Health Services.

The "guiding principles" for the distribution process, which were established by the state's Expert Vaccine Allocation Panel, were released on Monday by Abbott's office.