(CNN) — A Klansman found guilty for his role in the 1964 Freedom Summer killings of three civil rights workers has died in prison, according to the Mississippi Department of Corrections.

Edgar Ray Killen, a part-time Baptist minister and the plot leader, was convicted of three counts of manslaughter nearly 13 years ago.

Killen, who would have turned 93 on January 17, was pronounced dead Thursday night at the hospital of the Mississippi State Penitentiary, the department said. The cause and manner of death are pending an autopsy. However, no foul play is suspected, it said.

The slayings were among the most notorious of the civil rights era and were the subject of the 1988 movie “Mississippi Burning.”

The killings of James Chaney, 21, Andrew Goodman, 20, and Michael Schwerner, 24, helped galvanize the civil rights movement that ushered in major reforms in access to voting, education and public accommodations.

On June 21,1964, the three — all civil rights workers registering African-Americans to vote — were on their way to investigate the burning of a black church in Neshoba County when a sheriff’s deputy took them into custody for speeding.

After their release from the county jail in Philadelphia, a Ku Klux Klan mob tailed their car, forced it off the road and shot them to death.

Their bodies were found 44 days later, buried in an earthen dam, after an extensive FBI investigation.

At the time, no federal murder statutes existed, and the state of Mississippi never brought charges.

That year in a federal trial, Killen avoided prison when a jury deadlocked 11-1 in favor of his conviction. The lone holdout said she couldn’t convict a preacher.

Nearly 40 years later, he was retried after the state reopened the murder investigations.

The Mississippi Supreme Court upheld his convictions in 2007. 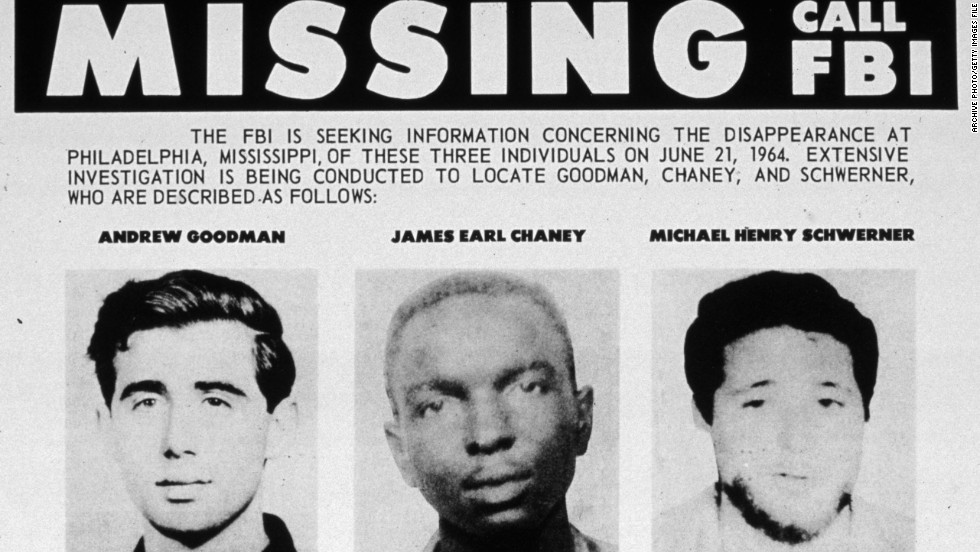 In 2010, federal authorities reopened the investigation in search of evidence to allow them to convict the remaining suspects.

Mississippi Attorney General Jim Hood said that investigation ran up against a stone wall 18 months ago when a witness backed out at the last minute after pledging to sign a sworn statement that would have implicated a suspect.

“It has been a thorough and complete investigation,” Hood said. “I am convinced that during the last 52 years, investigators have done everything possible under the law to find those responsible and hold them accountable; however, we have determined that there is no likelihood of any additional convictions.”

In June 2016, federal and Mississippi authorities closed the books on the case, saying no viable prosecutions remain in the more than half-century-old investigation.

Over the past 40 years, authorities have convicted people of notorious murders during the civil rights era.

They include the Birmingham, Alabama, church bombing in 1963 that killed four black girls and the 1963 assassination of Medgar Evers, a NAACP leader, in Jackson, Mississippi, by a member of the White Citizens’ Council, who was convicted more than 30 years later based on new evidence.

Correction: An earlier version of this story incorrectly gave the time frame of the case being closed. It was closed in June 2016.

ROY, Utah (KTVX) -- Police in Utah released body camera video Thursday of a shootout that left a man dead and a police dog wounded, and it started with a partially obscured license plate.

At 1:58 a.m. on Aug. 8, a Roy police officer pulled over a Gray Volkswagen Passat. Inside was driver Aaron Griffin, 21, of Plain City, Utah, and his passenger, 49-year-old Brian Cregg, of Ogden, Utah.

LOUISVILLE, Ky. (NewsNation Now) — The family and attorneys of Breonna Taylor called for Kentucky authorities release all body camera footage, police files and the transcripts of the grand jury hearings Friday morning, while the mayor and police chief called for safe and peaceful protesting during an afternoon briefing.

Taylor's family and their lawyers sharply criticized Kentucky's attorney general for the failure to bring charges against police officers in her death, calling for him to release the transcripts of the grand jury proceeding while vowing to continue their protests until the officers are charged.