(CNN) — Larry Nassar, the disgraced former USA Gymnastics team doctor who admitted to sexually abusing underage girls, has been transferred from a Michigan facility to a federal prison in Tucson, Arizona, to start a 60-year sentence for child pornography crimes, the Federal Bureau of Prisons said Saturday. 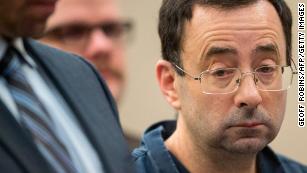 The high-security prison is one of nine in the federal system that offers sex offender treatment, according to the Bureau of Prisons website. It has 1,536 inmates — 1,387 in the prison and 149 at a minimum-security satellite camp.

The website says only prisoners who volunteer can receive the treatment.

“The Bureau recognizes sex offenders as a vulnerable population within a prison setting,” the site says. “Institutional assignment, unit management, Psychology Treatment Programs and re-entry planning promote the well-being of sex offenders while incarcerated and help both the offenders and society by reducing the likelihood of re-offense after release.”

It’s unknown how long Nassar, 54, will spend at the Tucson prison or if he will be transferred to another institution.

His release date is March 23, 2069, according to the prison system webpage.

If he’s still alive when he finishes his federal sentence, he will have to return to Michigan to serve sentences for sex crimes.

On Monday, Nassar was sentenced to 40 to 125 years in Eaton County, Michigan, where nearly 200 girls and women made statements about how his sexual abuse had changed their lives. The Eaton County sentence will run concurrently with the 40-to-175-year sentence from nearby Ingham County, Michigan.

In December, Nassar was sentenced for the child pornography charges in federal court.