(CNN) — She has been overshadowed by young teammate Mikaela Shiffrin in recent weeks but US veteran Lindsey Vonn hit back with victory in Italy Saturday to reignite her Olympic hopes and move to within seven of the record of World Cup wins.

The 33-year-old triumphed in the downhill in Cortina d’Ampezzo to take her tally to 79 World Cup victories, the most of any woman and second only to the 86 of Swedish slalom legend Ingemar Stenmark.

The American clocked one minute 36.48 seconds to beat Liechtenstein’s Tina Weirather for her 40th World Cup downhill win, with another young American Jacqueline Wiles in third for her second career podium spot.

“My focus right now is so much on the Olympics that I haven’t really thought about it that much this season,” Vonn said of Stenmark’s record.

“After the Olympics, that will be my No. 1 priority again and I’ll try to rack up as many wins as possible before I retire.”

Vonn has had a mixed season despite winning a super-G in Val d’Isere, France in December. She came in following an injury-disrupted 2017 after breaking her arm and is still skiing with a brace on her right knee to aid a long-term problem. 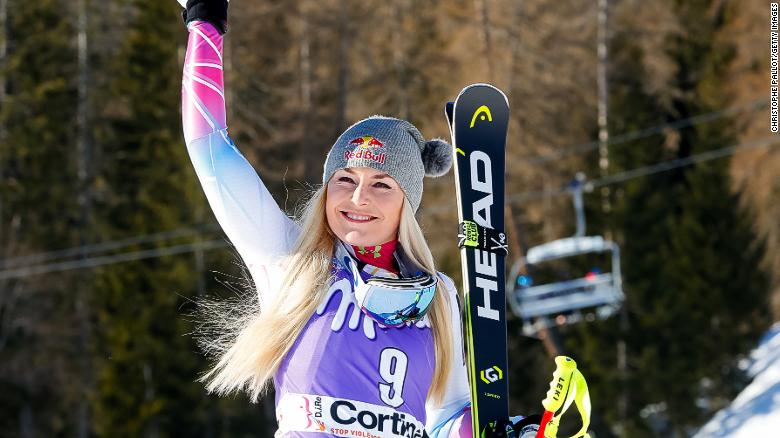 While Vonn has struggled, US starlet Shiffrin has become the preeminent skier on the world stage.

The 22-year-old slalom specialist has won 10 times this season, including five in a row since January 1, to edge to 41 World Cup victories overall.

READ: Why Christmas was canceled for Shiffrin

But Vonn’s first downhill win since January 2017 has rekindled her hopes of regaining the Olympic title she won in Vancouver in 2010. She missed the Sochi Winter Olympics with a knee issue.

Vonn’s 12th victory in Cortina — second behind Lake Louise (18) as her most successful venue — meant she becomes the oldest woman to win a World Cup downhill.

She surpassed the mark of now-retired Elisabeth Goergl, although the Austrian is still the oldest female winner of any World Cup race after taking a super-G in 2014 at 33 days, 301 days.

Vonn and Shiffrin came second and third in another downhill in Cortina Friday, behind Italy’s Sofia Goggia.

It was only Shiffrin’s third ever downhill podium after she placed third in Lake Louise in December and clinched her maiden win the next day on the same course in her fourth ever World Cup downhill race.

Poll: President Biden to reinstate COVID-19 travel rules… Would you get a vaccine to fly?