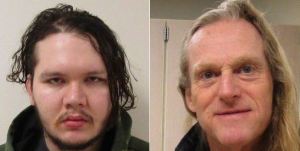 UPDATE – Mark Alexander Adams (right) was just picked up in Des Moines without incident and is on his way back to Lakewood to be interviewed by detectives. Adams is not the one not the one that police consider most dangerous.

Anthony Garver, who was found incompetent to stand trial for a first-degree murder charge in 2013, and Mark Alexander Adams were seen at the hospital's dining hall at about 6 p.m. Wednesday, police said, but  they were discovered missing at 7:30 p.m.

Police said Garver's real last name is Burke, but he goes by Garver. Police said he also has an alias of Deryk Garver.

"It is suspected that they left together on foot and may have obtained transportation," Lakewood Police told Q13FOX of the two men's escape. "They were both housed in the locked civil ward at the hospital and may have escaped out of a loose window in their room."

A search for the two men is under way, police said. "Local cab companies, Amtrak, Greyhound and Pierce Transit have been contacted and notified."

"Both subjects are reported by the hospital to be dangerous to others," police said.  "If anyone spots Garver or Alexander, do not attempt to contact them. Call 911 to report their location."

Garver is white, 28, described as 5-foot-8, 250 pounds, with long curly brown hair and a beard/mustache. He was last seen wearing a brown faded sweatshirt and orange jail flip-flops. Garver, on supervision with the Department of Corrections, had been arrested for first-degree murder in 2013 and was found not competent to stand trial. He was at the hospital to receive treatment. He is originally from the Spokane area, but his crime was in Snohomish County.

Adams is white, 58, described as 6-foot, about 210 pounds, with long blond hair. He was last seen wearing a white T-shirt and gray shorts. Adams committed his crime in Snohomish County and is from that area. Adams was sent to the hospital to receive treatment on an Assault 2/Domestic Violence arrest in 2014 where he was found not competent to stand trial. Adams may try to flee to California, police said.

Police said both men were on a court commit order of of Snohomish County to treat mental health. They both arrived at the hospital in February 2015, police said.

Garver is charged with killing Phillipa Evans-Lopez, 20, in a Lake Stevens home on June 17, 2013. She was found tied to a bed and stabbed to death.

WILMINGTON, Del. (NewsNation Now) — In one of his first moves after the Trump administration approved the start of the presidential transition, Joe Biden formally introduced some of the appointees to his national security and foreign policy teams Tuesday.

“It’s a team that reflects the fact that America is back, ready to lead the world, not retreat from it,” Biden said at the event in Wilmington, Delaware. His selections stood on stage, at least six feet apart and masked.

WASHINGTON (AP) President-elect Joe Biden is set to formally introduce his national security team to the nation, building out a team of Obama administration alumni that signals his shift away from the Trump administration’s “America First” policies and a return to U.S. engagement on the global stage.

The picks for national security and foreign-policy posts include former Secretary of State John Kerry to take the lead on combating climate change. Kerry and several other people set to join the upcoming administration will be discussed by Biden and Vice President-elect Kamala Harris during a Tuesday afternoon event.

NEW YORK (NewsNation Now) — The latest statistics show violent crime is on the rise across the country, with murders up dramatically in America’s three largest cities.

New York saw a glaring example of that trend over the weekend— another random attack on the subway, as a man tried to push a fellow stranger into the path of a train.