(CNN) — Nearly 70 years after his death on a Korean War battlefield, a New Jersey man was finally laid to rest with military honors.

Albert Atkins went missing during a battle as a 20-year-old Army private in 1951. On Friday, he was interned at last in a marked grave at the National Memorial Cemetery of the Pacific in Honolulu.

“It’s like finding a needle in a haystack,” said Lincoln Gayagas, a relative of Atkins, on the likelihood of locating his remains. “It came as a little bit of a shock that they were able to make a connection.”

Atkins went missing during an assault on a hill near Mae-Bong, South Korea, in May 1951. Fifteen years later two South Koreans informed the US Army of three graves near Kwandra-ri.

Two of the recovered soldiers were eventually identified as members of Atkins’ company. But for half a century, Atkins was known only as X-6385.

His unidentified remains were interred in Honolulu, and his name was added to the National Memorial Cemetery’s Court of the Missing, which honors those missing in action during World War II, the Korean War and the Vietnam War. 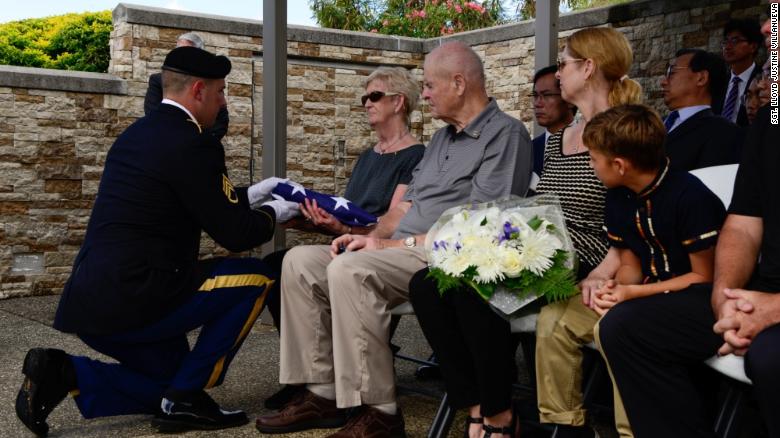 In 2005, after what the Defense Department described as “thorough historical and scientific analysis,” it disinterred Atkins’ remains and asked Sharylin Meyer — Atkins’ cousin and Gayagas’ mother-in-law — for a DNA sample. Tests showed a mitochondrial match, meaning Atkins and Meyer were from the same family.

On Friday, Atkins was reinterred at the National Memorial Cemetery, in a ceremony complete with a military honor guard. Gayagas and Meyer were in attendance.

“We were all humbled by the military’s efforts and we hope that Albert knows he was properly honored and memorialized,” Gayagas said. “We were all really touched by it.”

A Korean delegation attended the ceremony as well, said Gayagas, who presented his mother-in-law with flowers.

“It was a good reminder of how much they appreciated the sacrifices we made during the war,” Gayagas said.

Gayagas, who lives in Honolulu, may not have known it, but he had been visiting Atkins for years.

“My wife and I and our young son, we go up to the cemetery and pay our respects every Memorial Day,” he said. “To know that we were walking by his name all this time is really interesting.”