ADA, Okla. (KFOR) – The search for a missing Oklahoma woman with ties to Dallas continued Monday weeks after her alleged disappearance. 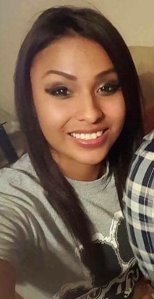 “At this point, the family’s concerned because nobody’s heard from her,” said Ada Police Detective Brian Engel.

26-year-old Britney Gomez, also known as Britney Tiger or Britney Williams, has not been seen in two weeks.

Police say Britney’s sister, Christina, called police Monday because she had not heard from her in a week.

“They talked to Britney’s husband and they were informed that she had been missing since the early morning hours of February the 11th,” Engel said.

Britney’s husband, William Gomez, told police he didn’t think much of it because Britney had left home before for several weeks and then returned. He says that is the reason he did not file a missing persons report.

“They went to sleep and he told officers he woke up about 3:30 in the morning on the 11th and she was gone,”
Engel told KXII.

William told police that all of Britney’s personal belongings were gone. Police believe Britney left on foot because she nor her husband have a car.

Police say the day before Britney went missing, she talked to her mom.

“[She] told her mom that she was leaving her husband, and she texted back maybe an hour later and said she was fine,” Engel said, “that she was having trouble with her phone, and since that time nobody’s heard from her.”

Family members say Britney often spends her time at casinos, and does have ties to Dallas and Oklahoma City.

Britney Gomez is described as a Native American female with black hair and brown eyes, 5’3″, and weighs approximately 118 pounds.

She has multiple tattoos, including a prominent chest piece and upper back piece.

If you have any information or know her whereabouts, call police immediately.

33 graves discovered during construction near cemetery

This Houston museum ranked among the best attractions …

LA mansion where Bugsy Siegel was killed is for sale

LA mansion where Bugsy Siegel was killed is for sale

2-years since the attack on the U.S. capitol

BestReviews is reader-supported and may earn an affiliate commission. Details. Not everyone enjoys the Super Bowl The Super Bowl is only days away. While this is a highly anticipated event for many adults, it’s just another Sunday for most kids, …

To keep kids occupied during the Super Bowl, you’ll want to have activities prepared so you can focus on cheering your team on to another victory.

What is the history behind the teddy bear?

Here’s everything you need to know about the history of the teddy bear and the best ones to gift this year.

Elmo is LIVE in studio ahead of Sesame Street Live! …

Which type of grain is best for reducing early heart …

Elmo is LIVE in studio ahead of Sesame Street Live! …

Which type of grain is best for reducing early heart …

This Midtown market is most historic food place in …

Driver gets 50 years for killing 2 passengers in …

How does cold weather have several effects on the …

Kitchen gadgets that will simplify your food prep …

Man shot in leg, dropped off in Third Ward, police …