DOUGLAS COUNTY, Colo. — Five officers were shot and one of them killed following a noise complaint at an apartment complex in a Denver suburb, according to the Douglas County Sheriff’s Office.

Two civilians also were shot and the suspect was shot and killed by police, Sheriff Tony Spurlock said.

Residents in the area were ordered to shelter in place.

UPDATE, we have multiple deputies down, no update on their status. The scene remains active and please avoid the area.

A motorcade accompanied the fallen officer from a hospital in nearby Littleton.

The incident happened shortly after 5 a.m. at the Copper Canyon Apartments in Highlands Ranch, about 20 miles south of Denver. 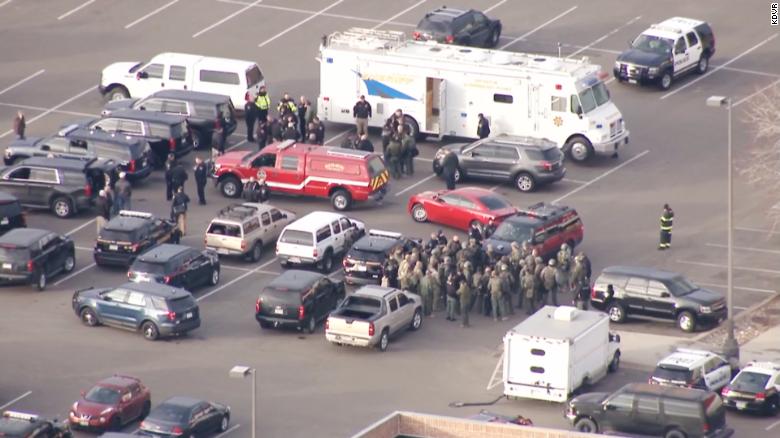 “Any citizens in the affected area are instructed to shelter in place, avoid windows and stay away from exterior walls,” the sheriff’s office tweeted. An emergency shelter has also been set up for those displaced by the massive police response.

A Code Red was sent out regarding this incident. Any citizens in the affected area are instructed to shelter in place, avoid windows and stay away from exterior walls. pic.twitter.com/RgutCEqgJA

Steven Silknitter, a resident of the Copper Canyon apartment complex, said he rushed home to check on his fiancee after hearing of the shooting and arrived to hear a “barrage of gunfire exchange.”

The area was blocked off, and Silknitter said he saw at least 20 police vehicles.

“It’s the last thing I would have thought of at my complex,” he said. “It’s like something out of a movie.”

President Trump tweeted his “deepest condolences to the victims of the terrible shooting in Douglas County … and their families.”

.@SheriffSpurlock names29-year-old Zackari Parrish, deputy and former CRPD officer killed in #CopperCanyonOIS. Our hearts our heavy today as we mourn the loss of one of our brothers. Thank you all for your support. https://t.co/kJKCYaZ7Uq pic.twitter.com/RmdB9CI5Tg

HENDRICKS COUNTY, Ind. (WXIN) -- A pumpkin smashed through a car windshield on Interstate 70 in Indiana on Sunday and came within inches of hitting the driver.

“I just started shaking because I guess I was so scared,” said Caleb Needham, the car's owner.

HOUSTON (CW39) A British man convicted of having sex with his family's pet chickens while his wife captured the encounters on video, will serve three years in prison.

Monday, West Yorkshire resident Rehan Baig, 37, received the sentence, a year-and-a-half after officers with the National Crime Agency raided his home on a tip, authorities say. Baig kept the videos on a computer folder marked "Family Vids." Officers found "moving images showing the Baig engaging in penetrative sexual intercourse with a number of chickens," according to prosecutor Abigail Langford.

In a social media post Monday, he posted a screenshot of a recent financial report on Joe Biden's alleged tax plan for some states.