The ongoing war of words between the United States and North Korea saw several new fiery salvos Saturday, a day on which the US military, in a show of force, flew bombers in international airspace over waters east of North Korea.

The heated remarks also came on a day in which mysterious seismic activity in North Korea refueled concerns over the rogue nation's nuclear ambitions.

At the UN, Ri said that Trump had made a missile attack on the US mainland more inevitable by insulting the dignity of North Korea.

"None other than Trump himself is on a suicide mission," Ri said in a speech at the UN General Assembly. "In case innocent lives of the US are harmed because of this suicide attack, Trump will be held totally responsible."

"Just heard Foreign Minister of North Korea speak at U.N. If he echoes thoughts of Little Rocket Man, they won't be around much longer!," Trump wrote.

Just heard Foreign Minister of North Korea speak at U.N. If he echoes thoughts of Little Rocket Man, they won't be around much longer!

The foreign minister also said the "dangerous reality (is) that the gambler who grew old using threats, frauds and all other schemes to acquire a patch of land holds the nuclear button. These are what constitute the gravest threat to the international peace and security today."

There was no other immediate response from the White House to Ri's remarks, but there were military manuevers.

It's the farthest north of the Demilitarized Zone (DMZ) that US fighters or bomber aircraft have ever flown this century, the Pentagon said.

The flight underscored "the seriousness with which we take DPRK's reckless behavior," the Pentagon said, using an acronym for North Korea's official name, the Democratic People's Republic of Korea.

"This mission is a demonstration of US resolve and a clear message that the President has many military options to defeat any threat," Pentagon spokeswoman Dana White said in a statement.

"North Korea's weapons program is a grave threat to the Asia-Pacific region and the entire international community. We are prepared to use the full range of military capabilities to defend the US homeland and our allies."

There has been name-calling and heightened tensions between Washington and Pyongyang this week as the UN met in New York.

In his speech Tuesday Trump threatened to "totally destroy" North Korea if the US was forced to defend itself or an ally. Trump tweeted Friday that Kim was "obviously a madman" who would be "tested like never before."

Throughout the week Washington and Pyongyang have had strong words for each other.

Earlier this week North Korea's Ri said his country could test a powerful nuclear weapon over the Pacific Ocean in response to Trump's threats of military action.

Those remarks came shortly after Kim Jong Un made an unprecedented televised statement, accusing Trump of being "mentally deranged." 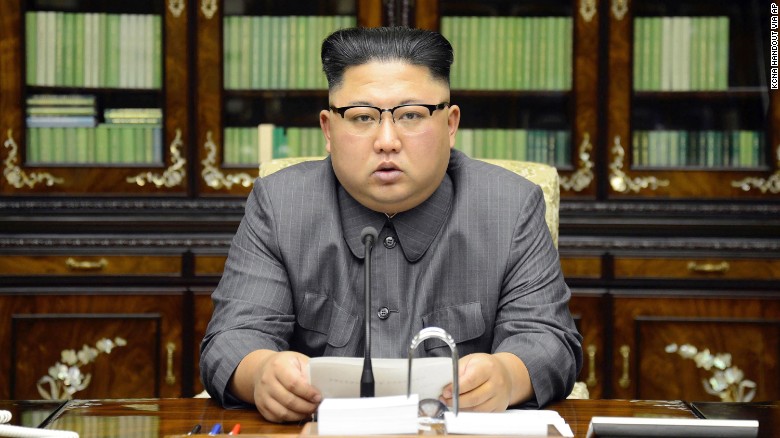 In a rare direct statement, Kim said that Trump would "pay dearly" for the threats, and that North Korea "will consider with seriousness exercising of a corresponding, highest level of hard-line countermeasure in history."

"I am now thinking hard about what response he could have expected when he allowed such eccentric words to trip off his tongue," Kim said. "I will surely and definitely tame the mentally deranged US dotard with fire."

Where are the world's nuclear weapons?

North Korea has been working on developing missiles that can reach the United States and its allies and pair them with a miniaturized nuclear warheads.

To comply with a UN Security Council resolution calling for sanctions over North Korea's nuclear activity, China said Friday that it will limit its exports of refined petroleum products to Pyongyang as well as ban imports of the North's textiles.

The Chinese Ministry of Commerce said in a written statement that it will restrict exports of refined petroleum products from October 1, and ban the export of condensate oil and liquefied natural gas immediately.

A ban on textile imports from the North will go into effect immediately, the statement said.

On Thursday, Trump announced new US sanctions to penalize any company or person doing business with North Korea by either cutting off their access to the US financial system or freezing their assets -- or potentially both.

Scientists said they believe the seismic activity Saturday could have been caused by North Korea's sixth test of a nuclear weapon on September 3.

Analysts were working to determine whether the tremors detected near the Punggye-ri nuclear site were natural or man-made. 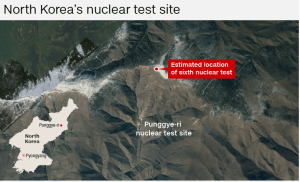 The larger one had a 3.4 magnitude, the group's initial assessment found.

"This geographical location is a non-seismically active zone. The September 3 event would've weakened the zone, which could still have further repercussions, such as radioisotopes coming through possible subsequent cracks which would allow scientists to assess what type of materials were used," said Lassina Zerbo, the group's executive secretary.

The Korea Meteorological Administration also cited the possibility that the seismic activity Saturday occurred because of the geological stress from the nuclear test. 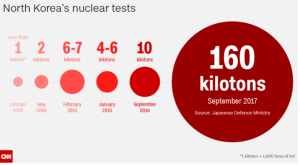 The South Korean agency confirmed there were two earthquakes Saturday.

Park Jong-shin, an analyst for the agency, agreed the latest earthquakes might be aftershocks.

"It is assumed that the earthquakes occurred because of North Korea's latest nuclear test," Park said.

The US Geological Survey measured a magnitude 3.5 earthquake 22 kilometers (more than 13 miles) east-northeast of Sungjibaegam, North Korea. The depth at the epicenter was 5 kilometers (3.1 miles).

"We cannot conclusively confirm at this time the nature (natural or human-made) of the event," the USGS said.

Maggie’s Must-Haves for decking the halls in a fresh, new way!

Band student makes greatest save ever after cymbal breaks