NEW YORK— A recent Facebook post by a New York University student has led to the school issuing a formal apology for its inappropriate menu for Black History Month.

“I walked into the Downstein, and noticed that the theme was Black History Month. The menu was interesting with ribs, collard greens, cornbread, smashed yams, and macaroni and cheese. However, the most interesting part of the meal happened to be the drinks. As beverage choices today, there was red Koolaid and watermelon flavored water,” explained NYU student Nia Harris in a now viral Facebook post.

Harris said she immediately tried to find out who was responsible and was sent to the head cook who told her, “‘I got together with the cooks who are black and from here and they put this together.'”

Harris tagged all of the Deans in her post, which alerted NYU’s Black Student Union.

The Governance Council of Minority and Marginalized Students, The Black and Brown Coalition and the Black Student Union issued a statement that read in part:

“The menu was exacerbated with the drink options were offered. These drink options perpetuate harmful stereotypes that have existed about the black community for decades, and show an extreme level of cultural insensitivity.”

Are you outraged at @NYUDining for their racially insensitive #BlackHistoryMonth menu? Register for #BSC2018 so your voice is heard ✊🏽✊🏾✊🏿 pic.twitter.com/uc1qq9TcER

Although some students were upset, there were many that quickly jumped to the schools defense. 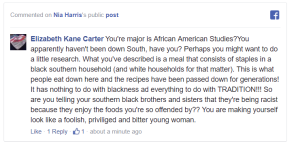 I feel like the watermelon situation at NYU got DRAGGED and now thanks to y’all, they’re never gunna serve Mac and cheese again so 🤷🏽‍♀️ way to go.

What is the big deal… Do we not eat corned beef, cabbage, & drink green beer on St. Patrick's day? How about salsa, guac, chips & margaritas on Cinco de Mayo? #VirtueSignaling

“Earlier this week, the dining hall served food and beverages associated with racial stereotypes, including watermelon-flavored water and red Kool-Aid. The menu choices were ‘inexcusably insensitive’ and the university was shocked to learn of the drink and food choices.”

Hamilton added the dinning hall’s food services provider will be giving its staff sensitivity training, however, it was later reported those involved have been fired.

What the actual f is going on? This and NYU serves watermelon and Kool-Aid? They are actively mocking black Americans and I am so disgusted I could cry.

There's just no pleasing some people:
“This is what it’s like to be a black student at New York University … In 2018, I literally had to explain why displaying watermelon and koolaid in celebration of Black History Month was .. racially insensitive..”https://t.co/oWUYUglHFa

Stimulus check update: A fourth payment would be critical for many, study says