ISLAMABAD, Pakistan — Pakistani officials on Saturday authorized the deployment of soldiers in the capital, Islamabad, to restore order after two weeks of raucous and violent protests.

At least two people died and more than 250 others have been injured in the street demonstrations, hospital officials said.

The Interior Ministry called for a “sufficient number” of Pakistan Army troops to help establish “law and order” in the Islamabad Capital Territory, according to the internal order.

The move, conferred under constitutional powers, was requested by the Islamabad Capital Territory Administration. It was not immediately clear when, or if, the army would take the streets.

Protesters had been blocking a key road connecting Islamabad and the neighboring city of Rawalpindi since November 6.

The group is demanding the resignation of the country’s law minister for what it considers blasphemy after amended parliamentary bills weakened rules that require lawmakers to reference the Prophet Mohammed when taking their oaths.

Protesters on Saturday tried to break into the home of Law and Justice Minister Zahid Hamid, police in the Punjabi city of Sialkot said. Hamid and his family weren’t home at the time. The gate at the residence was damaged, police said.

Pakistan Interior Minister Ahsan Iqbal had given protesters around Islamabad until last Thursday to disperse, but they continued their demonstration.

Video from the scene Saturday showed law enforcement forces carrying sticks and firing tear gas and rubber bullets at protesters. Groups of protesters could be seen throwing rocks with their hands or using slingshots. 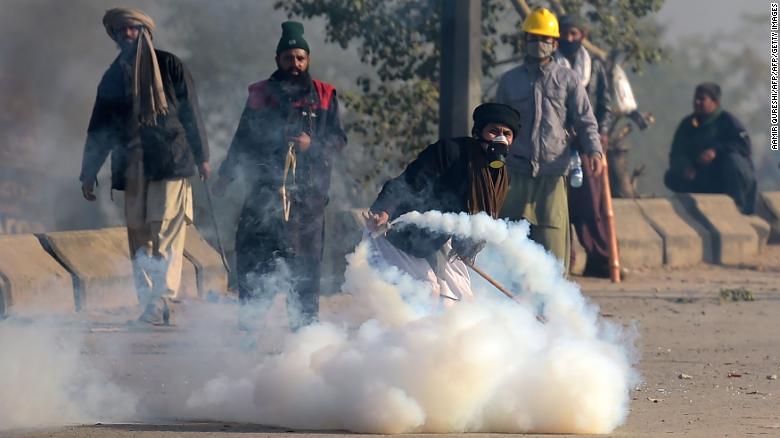 At least 112 people, including protesters and law enforcement, were being treated at the Pakistani Institute of Medical Services in Islamabad, said Dr. Tahir Nadeem, a physician at the hospital.

Three smaller protests broke out in Rawalpindi on roads leading to the capital, a journalist there said. The motorway between Rawalpindi and the eastern city of Lahore also was closed, as authorities feared more protesters might try to enter the city to support demonstrators in the capital.

Protests also broke out in Lahore and the southern port city of Karachi, local media reported.

Private television channels in Pakistan were taken off the air by the Pakistan Electronic Media Regulatory Authority, according to a message slate that replaced the channels’ programming. 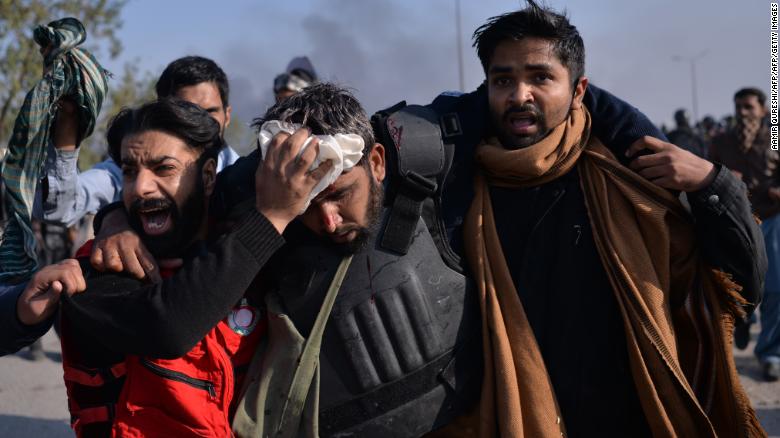 The agency had ordered local TV channels to refrain from live coverage of the ongoing government operation.

Only state-run PTV, which has not been reporting on the protest, remained on air.

Demonstrators accuse the government of blasphemy based on a proposed changed that they say would soften electoral laws. The government has apologized and denied making such a change, calling it a clerical mistake.

The movement was formed by followers of Mumtaz Qadri, who was executed last year for shooting and killing Punjab Gov. Salman Taseer in 2011. Qadri allegedly killed Taseer because the governor spoke out against the country’s blasphemy law, which makes insulting Islam a crime punishable by death.

As news of Qadri’s death emerged, thousands of the executed man’s supporters took to the streets in cities across Pakistan. They praised Qadri as a martyr who died for the cause of the Prophet Mohammed.

Since then, Tehreek-e-Labaik Pakistan has been attracting political and religious support through the country. A video on the party’s Facebook page shows Rizvi reciting religious phrases into a microphone and his supporters repeating the phrases in unison.