WASHINGTON — Secretary of State Mike Pompeo called Iran “the greatest sponsor of terrorism in the world,” during a joint press conference with his Saudi counterpart in Riyadh on Sunday, in a further signal the United States intends to pull out of the Iran nuclear deal.

“We are determined to make sure it never possesses a nuclear weapon,” Pompeo said of Iran during his first visit to the Middle East since being sworn in as secretary of state last week.

“The Iran deal in its current form does not provide that assurance,” Pompeo continued at the briefing alongside Saudi Foreign Minister Adel al-Jubeir. “We will continue to work with our European allies to fix that deal. But if a deal cannot be reached, the (US) President has said that he will leave that deal.” 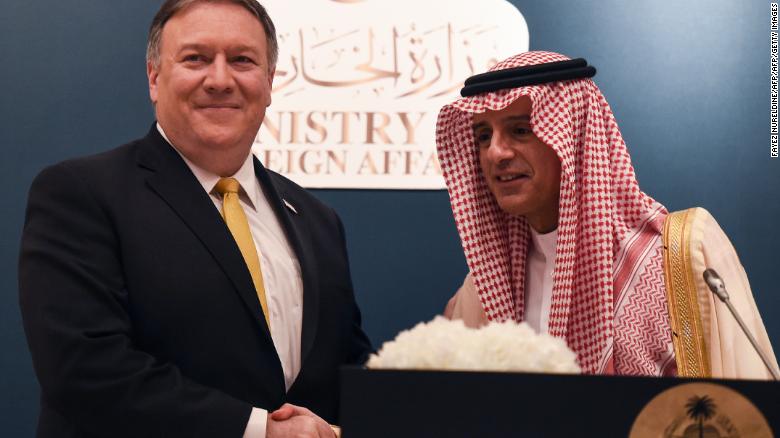 It is the latest indication in recent days that the United States would not recertify the Iran nuclear deal in May, its current deadline.

US President Donald Trump has until May 12 to decide whether to continue waiving sanctions on Iran that were lifted under the Iran deal, formally known as the Joint Comprehensive Plan of Action.

Under US law, the President has to recertify the agreement every few months.

As part of the 2015 pact — agreed by Trump’s predecessor Barack Obama, some European countries and Russia and China — Iran must reduce its uranium stockpile in return for international sanctions being lifted.

But Trump has long been critical of the accord, just last week calling it “insane” and “ridiculous” during a state visit with French President and deal supporter Emmanuel Macron.

During a press conference at the NATO headquarters in Brussels last week, Pompeo again reiterated Trump’s displeasure with the deal.

“The President has been clear — absent a substantial fix, absent overcoming the shortcomings, the flaws of the deal — he is unlikely to stay in that deal past this May,” former CIA chief Pompeo told reporters, during his first diplomatic trip since Trump fired former Secretary of State Rex Tillerson in a dramatic series of tweets last month.

After visiting Brussels and Saudi Arabia, Pompeo will travel to Israel and Jordan.

Pompeo said, “Iran has only behaved worse since the deal was approved,” accusing it of carrying out cyberhacking campaigns, arming Houthi rebels in Yemen, and supporting what he described as Syrian President Bashar al-Assad’s “murderous regime.”

Pompeo said the United States would continue to assist its ally Saudi Arabia “with its defense needs,” adding there needed to be a political solution to end the current war with Houthi rebels in neighboring Yemen.

Since March 2015, Saudi Arabia has been leading a coalition of Gulf states against the Houthi rebels in Northern Yemen, after the rebels drove out the US-backed and pro-Saudi government.

Iran, in turn, has been accused of backing the rebels.

The war in Yemen is now the world’s worst humanitarian crisis, United Nations Secretary General Antonio Guterres said earlier this month, with more than 22 million people in desperate need of aid and protection.

Pompeo also urged unity between the Gulf states, after Saudi Arabia — who along with Bahrain, Egypt and the United Arab Emirates — has severed ties with neighboring Qatar.

In a statement, the fast-food chain said it’s letting the burger rot to make a statement, showing that mold “can be a beautiful thing.”

ELIZABETHTOWN, Ky. -- Date night for two off-duty officers ended with them foiling a robbery at a restaurant chain in Kentucky.

Chase and Nicole McKeown are both police officers in Elizabethtown and have been married for six months.

KANSAS CITY, Kan. (WDAF) - A school crossing guard is being hailed a hero after stepping in to help save lives before being hit and killed in Kansas City.

A crosswalk in front of a KCK Catholic school turned into a crime scene Tuesday morning, the crash happening just before 8 a.m. near the intersection of 54th Street and Leavenworth Road.

93% of women say they’ve been victims of body shaming