The government has declared three days of mourning.

At least 54 people were injured in the blaze Saturday, including eight firefighters and a child. Four of the firefighters are in critical condition Sunday, according to Paulo Santos, an operations and emergencies official with the National Relief Operations Command in Lisbon.

Some victims were burned to death in their cars as they tried to flee, officials said. 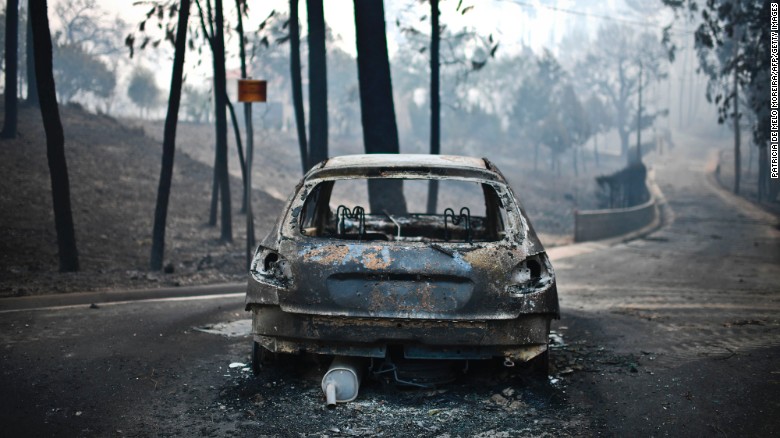 The blaze spread Saturday to Pedrogao Grande community, forcing residents to flee the area to escape towering flames. Pedrogao Grand is about 120 miles north of Lisbon.

"Many cars could not get out and people burned to death inside their cars," Interior Ministry official Jorge Gomes told CNN affiliate TVI. Firefighters were still fighting the flames Sunday.

The municipality's Mayor, Valdemar Alves, said there were areas "completely surrounded" by the blaze and not enough firefighters to battle the flames. 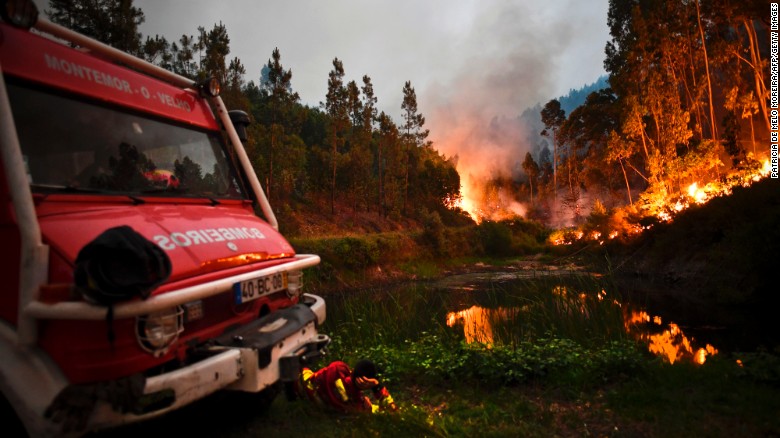 "The violence of this fire was such that I am certain many people have died," Alves told TVI. "I am shocked with this death toll."

Authorities said the number of victims may rise as fire officials inspect the villages affected.

More than 700 firefighters and other emergency responders are battling the blaze.

Portugal's President, Marcelo Rebelo de Sousa, offered a word of comfort to those still battling the fires and said that "all that could be done was done."

European countries are coming together to assist Portugal. France and Spain have sent planes to help mitigate the blaze, the European Commission said.

"We express our condolences to those that have lost loved ones," said Christos Stylianides of the European Commission. "The EU is fully ready to help. All will be done to assist the authorities and people of Portugal at this time of need."

"Overwhelmed by the tragedy of Pedrogao Grande. The Portuguese people have our solidarity, support and affection," Spain's President Mariano Rajoy Brey wrote on Twitter.

Pope Francis prayed for the victims during his weekly prayer on Sunday.

"I express my closeness with the dear Portuguese people for the devastating fire that is affecting the forests around Pedrogao Grande, causing many deaths and injuries. We pray in silence," the Pope said.

Sad to learn of tragic loss of lives in the forest fire in Portugal. Deepest condolences to the Portugese people on this tragedy.

The Portuguese Football Federation changed its Twitter avatar to black to mourn the victims of the fire. It released a statement announcing a minute of silence to be held before Portugal's first match of the Confederations Cup against Mexico on Sunday -- and said it will make a donation to help the victims and their families.

Britain issued a travel warning for its citizens warning them of the fires in Portugal and urging them to be careful while visiting or driving through woodland areas.

"Around 2.6 million British nationals visited Portugal in 2015. Most visits are trouble-free," the British Foreign and Commonwealth office said in a statement.

Last year, thousands of firefighters battled at at least 12 huge fires across the country.

Three people were killed and over 1,000 evacuated in the Portuguese island of Madeira due to the fierce wildfires a year ago.