HOUSTON, Texas – The Houston Rockets solid 20-7 start this NBA season has led to a contract extension for head coach Kevin McHale. During his four seasons as head coach, McHale, 57, has led the Rockets to a 153-104 record including first round exits the past two years to Oklahoma City and Portland. 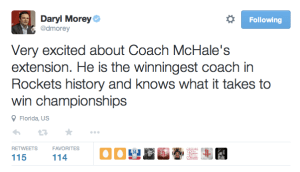 The Rockets are in fourth place in the Western Conference which has been very impressive considering the amount of games lost to injury to star center Dwight Howard and lost time from forward Terrence Jones and guard Patrick Beverly.

The Houston Rockets released this official press release in the afternoon:

The Rockets have jumped out to a 20-7 record this season coming off of a 54-28 season in 2013-14 (the fifth best regular season in Rockets history).  In each of McHale’s three campaigns with the Houston Rockets, he has made significant leaps in both total wins and winning percentage.  After finishing the lockout shortened 2011-12 season 34-32 (.515), McHale led the team to a 45-37 (.549) in his second season.  After a 54-28 (.659) season in 2013-14, the Rockets have witnessed win improvements of 11 win and nine win improvements in consecutive seasons under McHale.  McHale was named NBA Coach of the Month for February 2014.

“Kevin is an integral part of the Rockets family,” said Rockets owner Leslie Alexander, “He embodies the leadership, passion, knowledge, and team-first qualities we need as we continue our pursuit of bringing another NBA Championship to the City of Houston and Rockets fans all over the world.”

A seven-time NBA All-Star, McHale helped lead Boston to three NBA championships during a 13-year playing career with the Celtics. Following his playing career, McHale spent 16 seasons as an executive with the Minnesota Timberwolves, including two stints as the team’s head coach during the 2004-05 and 2008-09 seasons. McHale also served as an in-studio analyst for TNT and NBA TV prior to being named the Rockets Head Coach on June 1, 2011.

SLAB Ride for justice in the Ahmaud Arbery is Saturday