Two attackers targeted a Methodist church in Quetta, but only one managed to detonate his vest, said Sarfaraz Bugti, the interior minister of Balochistan province. The second attacker was shot by a church security guard before he detonated his explosives, Bugti said. 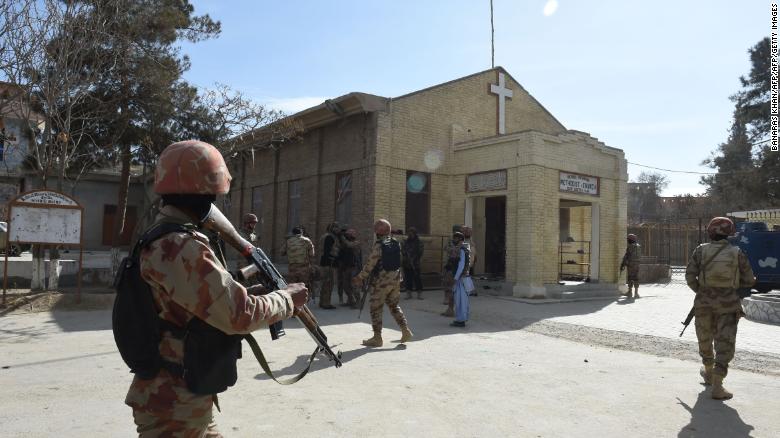 The civilians were killed during the blast and the intense firefight that followed, according to Moazzam Jah Ansari, the provincial police chief. More than 400 people were in the church at the time of the attack, he said.

More than two dozen others were wounded, said Wasim Baig, a spokesman for Quetta Civil Hospital, where victims were transported.

The ISIS affilliate in Afghanistan and Pakistan said it was behind the attack. In a text message to CNN, a commander of the affiliate, known as ISIS Khorasan, said that details on the attack and a formal claim of responsibility will be released by the Amaq news agency, the media wing of the terror group.

By the grace of Almighty, 02 Suicide Bombers stopped on entrance of Church in #Quetta. LEAs took 16 mins to complete the op. CCPO & DC #Quetta along with IG Police #Balochistan lead the operation from forefront.

Pakistan’s Foreign Office condemned the attack, tweeting that the nation’s “resolve against terrorism cannot be deterred by these cowardly acts.”

Attack of terrorists on Zarghoon road church in Quetta is condemned. Pakistan’s resolve against terrorism cannot be deterred by these cowardly acts.

The defense minister echoed the same sentiment, tweeting that the nation’s commitment to protecting minorities and abolishing terrorism will not change.

Quetta is the largest city and provincial capital of Balochistan province.

Christians make up 2% of Pakistan’s population, and face persecution from hardline Islamists, who want to see a strict interpretation of Islamic law take precedence in the legal system.

Attacks by terror groups in the nation are not limited to Christians.

Even with the court closed to the public because of the coronavirus pandemic and Washington already consumed with talk of Ginsburg's replacement, the justice's former colleagues, family, close friends and the public will have the chance Wednesday and Thursday to pass by the casket of the second woman to serve on the Supreme Court.