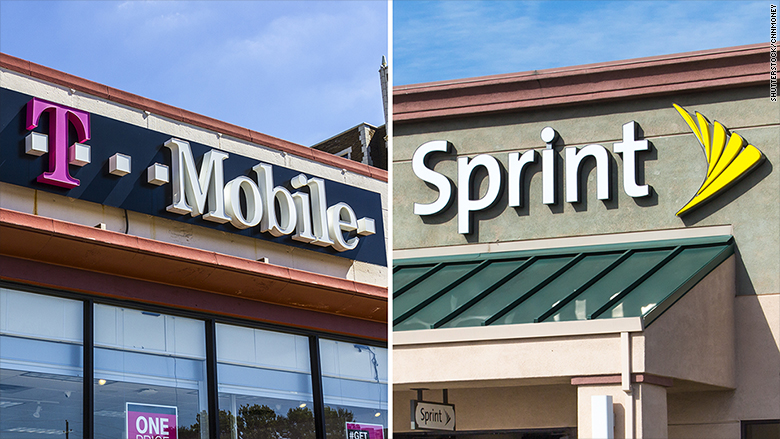 WASHINGTON — T-Mobile and Sprint finally agreed to a massive telecom merger after years of negotiations punctuated by two breakups.

The $26 billion merger, announced Sunday, values Sprint near its current share price of $6.50.

The tie-up would position the telecom companies as fiercer competitors to Verizon and AT&T, which have long dominated the US market.

“I’m excited to announce that @TMobile & @Sprint have reached an agreement to come together to form a new company — a larger, stronger competitor that will be a force for positive change for all US consumers and businesses! Watch this & click through for details.” said T-Mobile CEO John Legere, in a tweet Sunday.

I’m excited to announce that @TMobile & @Sprint
have reached an agreement to come together to form a new company – a larger, stronger competitor that will be a force for positive change for all US consumers and businesses! Watch this & click through for details.

A report that the deal was getting close drove up Sprint’s stock price by 8% on Friday and T-Mobile’s price edged up as well. The stock price for SoftBank, a Japanese conglomerate with a majority stake in Sprint, rose by 3%.

Sprint and T-Mobile first discussed a merger in 2014 but scrapped it because of concerns about regulatory challenges from the Obama administration.

The companies expected to have a better shot at the merger under the Trumpc administration.

SoftBank CEO Masayoshi Son met with Trump the month before he took office to talk up an investment in US businesses.

A few weeks later, T-Mobile’s Legere said he was open to “various forms of consolidation” when asked about a potential merger with Sprint and SoftBank under the Trump administration.

But last November, after much speculation, the two companies issued a statement saying they “have ceased talks.”

“While we couldn’t reach an agreement to combine our companies, we certainly recognize the benefits of scale through a potential combination. However, we have agreed that it is best to move forward on our own,” Marcelo Claure, the Sprint CEO, said at the time.

Sprint and T-Mobile’s announcement is just the latest step in an ongoing movement towards telecom consolidation. AT&T is in talks to acquire Time Warner, which owns CNN and CNNMoney. The outcome of that $85 billion merger-in-the-making depends on a case in federal court, which is pending the decision of the judge.

ELIZABETHTOWN, Ky. -- Date night for two off-duty officers ended with them foiling a robbery at a restaurant chain in Kentucky.

Chase and Nicole McKeown are both police officers in Elizabethtown and have been married for six months.

KANSAS CITY, Kan. (WDAF) - A school crossing guard is being hailed a hero after stepping in to help save lives before being hit and killed in Kansas City.

A crosswalk in front of a KCK Catholic school turned into a crime scene Tuesday morning, the crash happening just before 8 a.m. near the intersection of 54th Street and Leavenworth Road.

Little Zayne Caldwell's early arrival into this world led to a surprise reunification for his father and a nurse who cared for them both.

Zayne was born on January 30 in New Brunswick, New Jersey, 10 weeks before his expected due date.

Rapper Willie D shows off his latest video ‘Coon II’ and calls out a superstar celeb…guess who?