Six more suspects were being held in Paterson, New Jersey Monday, awaiting an extradition hearing, in connection with  the savage machete attack on a 15-year-old Bronx boy.

One other suspect, Kevin Alvarez, 19, has already been charged with murder and gang assault in the brutal death of Lesandro“Junior” Guzman-Feliz.

PIX11 News first reported Sunday that multiple people were taken out of an alleged gang stronghold on East 24th Street in Paterson.

They are suspected of being members of the Trinitarios gang.

Paterson, New Jersey police first received a tip at about 1:45 p.m. Sunday. They sent a large contingent of cops and found four people tied to the attack of Lesandro “Junior” Guzman-Feliz who were holed up at a house on East 24th Street in Paterson, a source tells PIX11. 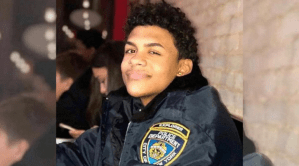 When authorities went to the house, one suspect managed to escape but was apprehended minutes later, sources say.

Another suspect was taken into custody in the Dominican Republic, a source said.

The leader of the Trinitarios gang apologized on Facebook, saying the vicious murder resulted from a case of mistaken identity.

Guzman-Feliz was dragged out of a bodega at East 183rd Street and Bathgate Avenue and hacked to death with a machete on Wednesday night following a dispute with a group of males, officials said.

A source told PIX11 that one gang member was angry because a relative was featured in a sex video and thought Guzman-Feliz was in the video.

Guzman-Feliz's death sent shockwaves through the community, and on social media, as the hashtag #JusticeforJunior began trending. Rapper Cardi B, a Bronx native, was among those paying tribute, posting on Instagram about getting justice for the teen.

A GoFundMe page has been set up by Guzman-Feliz' family to help with funeral costs and other financial difficulties. To donate, visit Justice For Junior.

The identities of the remaining four suspects taken into custody were not immediately released.

(AP) -- Movie theater chain AMC warned Wednesday that it may not survive the coronavirus pandemic, which has shuttered its theaters and led film studios to explore releasing more movies directly to viewers over the internet.

All of AMC's theaters are shut down through June, which means the company isn't generating any revenue. AMC said it had enough cash to reopen its theaters this summer, as it plans to do. But if it’s not allowed to reopen, it will need more money, which it may not be able to borrow.

US senators: Can colleges reopen safely?

She stole $27,000 from an elementary school’s PTA and spent it on herself, deputies say