(CNN) — Pope Francis is having cards printed and distributed showing a 1945 photo of victims of the nuclear bombing of Nagasaki along with the words “the fruit of war.”

The photo captures a boy carrying his dead brother on his shoulders while he waits for his turn at the crematory. It was taken by US Marine photographer Joe O’Donnell shortly after the bombs were dropped at the end of World War II.

The leader of the world’s Roman Catholics asked that “the fruit of war” be written in the back of the card along with his signature “Franciscus.”

A short caption explains the content and origin of the photo, it reads in part: “The young boy’s sadness is expressed only in his gesture of biting his lips which are oozing blood.” 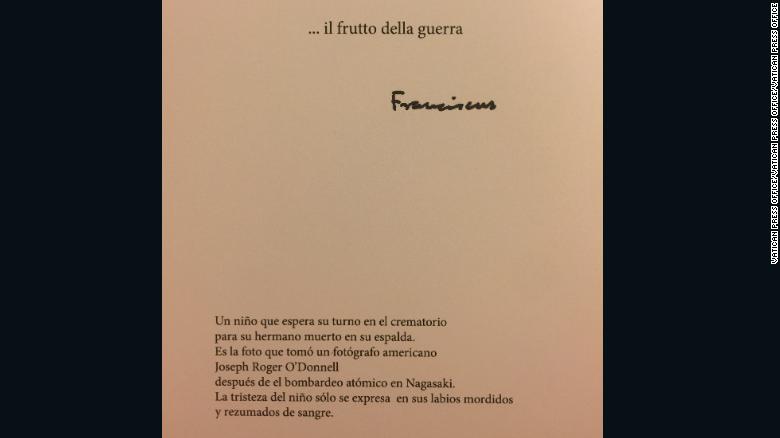 After the bombs dropped by the US on Nagasaki and Hiroshima forced Japan’s surrender and ended World War II in 1945, O’Donnell spent four years documenting the aftermath in the two cities, according to Library of Congress records.

His photos were published in the book titled “Japan 1945: A US. Marine’s Photographs from Ground Zero.”

CNN’s senior Vatican analyst John Allen wrote on his website: “Though release of the photo in the run-up to New Year’s does not add anything substantive to the pontiff’s positions, it’s nevertheless the first time Francis has asked that a specific image be circulated in the holiday season, suggesting he believes its message is especially relevant at the moment.“

The Pope has previously condemned nuclear weapons and highlighted the impact of conflict on children, Allen wrote.