NEW YORK — House Republicans passed a bill this week that could strip away health insurance from millions of Americans.

Lawmakers and President Trump celebrated the vote Thursday, saying it will make health care better for everybody. But the American Health Care Act, as the bill is named, is also expected to leave millions of people without coverage. That fact seemed to be overlooked in the frenzy over last-minute changes to the legislation that would weaken Obamacare’s protections for those with pre-existing conditions.

Some 24 million fewer people would have insurance in 2026 than under Obamacare, according to a Congressional Budget Office analysis of an early version of the bill. The legislation has changed a bit since then, with many experts predicting that the revised score will show even more would be affected.

A total of 52 million people would be uninsured in 2026, compared with 28 million if Obamacare were to continue, according to the CBO report, which was released in March.

This would reverse the historic gains in coverage in recent years. Since Obamacare was passed, the nation’s uninsured rate has fallen to a historic low of 10.3% for those under age 65, according to data from the Centers for Disease Control and Prevention.

Were you ever covered by a state or federal high risk pool? What was your experience? Tell us about it at healthcarestories@cnn.com and you could be featured in an upcoming story.

Many low-income adults have obtained coverage through Medicaid expansion, while others have been able to sign up for subsidized individual market policies on Obamacare exchanges. Also, children under age 26 are now allowed to stay on their parents’ insurance plans. 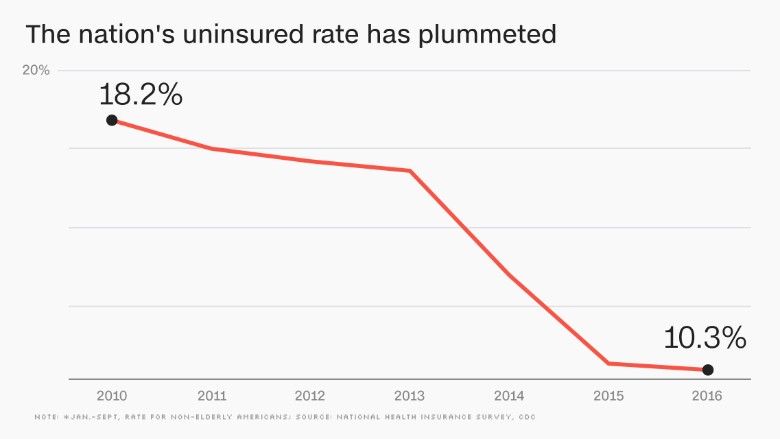 The Republican plan, on the other hand, would make coverage unaffordable in a variety of ways.

It would end enhanced federal funding for Medicaid expansion and curtail federal support for the overall Medicaid program, which provides coverage for more than 70 million people. All told, it would decrease federal spending on the program by $880 billion over the next decade, the CBO estimates.

That would leave 14 million fewer people in the program by 2026, accounting for more than half of the coverage decline.

The legislation would also allow insurers to charge higher premiums in the individual market to those in their 50s and early 60s, while reducing rates for younger Americans. And it would overhaul the way the federal government helps people pay for coverage — providing tax credits to those higher on the income scale, but making them less generous for many lower-income enrollees and for older consumers than Obamacare’s subsidies.

Those changes would result in 2 million fewer Americans — many of them older folks — in the individual market, according to CBO.

Meanwhile, 7 million fewer people would be covered by employer plans. More Americans would opt out because the bill would eliminate the individual mandate — which requires most people to get insurance or pay a penalty. Also, fewer companies would offer policies since the employer mandate would be lifted. Companies would be tempted to let their workers obtain coverage on the individual market since more people would qualify for tax credits to help pay their premiums.

The Republican bill has left insurance industry groups and consumer advocates concerned about the massive increase in the number of uninsured Americans.

“The House voted today to take health care coverage away from tens of millions of Americans, reduce benefits and increase costs for millions more – including the sick – and gut a [Medicaid] program that has been a lifeline for vulnerable people for more than 50 years,” said Bruce Siegel, CEO of America’s Essential Hospitals, a trade association that represents safety net hospitals.

(CNN)Minnesota Attorney General Keith Ellison is increasing charges against former Minneapolis police officer Derek Chauvin to second-degree murder in George Floyd's killing and also charging the other three officers involved in the incident, according to a tweet from US Sen. Amy Klobuchar.

Ellison's official announcement is expected to come Wednesday afternoon, more than a week after Floyd was killed while in police custody in Minneapolis, sparking nationwide protests that call for the end to police violence against black citizens.

WASHINGTON D.C. (KXAN) — As George Floyd's family prepares to lay him to rest in Houston, Texas, lawmakers say they are mourning alongside them and they're calling for action in Washington D.C. to address policing policies and end the violent protests.

U.S. Rep. Henry Cuellar says the killing of Floyd in Minnesota is horrific.

Thousands of employees returned to work this morning at U.S.-run maquiladoras in Juarez, Mexico, under new safety protocols to stem additional COVID-19 outbreaks.

A massive fiery and concussive explosion on Friday at the SpaceX launch facility in South Texas could have caused untold damage to endangered wildlife and the eco-sensitive Gulf of Mexico border region, several environmentalists told Border Report on Monday.