BOSTON -- Thousands of counterdemonstrators marched Saturday in downtown Boston in response to a self-described free speech rally that has sparked concerns of possible violence.

The march and rally come one week after racially motivated protests in Charlottesville, Virginia, turned deadly.

A Facebook page purportedly linked to the Boston rally sought to distance itself from last weekend's white supremacist gathering in Charlottesville. Counterprotester Heather Heyer, 32, was killed when a car plowed into a crowd of anti-racism advocates gathered to oppose the "Unite the Right" rally there.

Organizers for the Boston event invited "libertarians, conservatives, traditionalists, classical liberals, (Donald) Trump supporters or anyone else who enjoys their right to free speech," according to a group calling itself the Boston Free Speech Coalition.

Throngs of counterprotesters turned out organized by a coalition of mostly left-leaning groups and activists such as the Black Lives Matter movement. 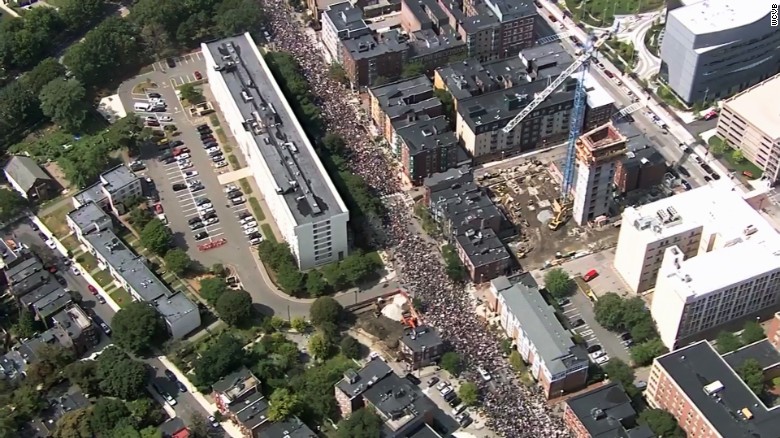 Amid a heavy police presence, men, women and children from diverse backgrounds showed up Saturday morning to march from the Reggie Lewis Track and Athletic Center in Roxbury to Boston Common.

Some carried signs with messages such as "No Trump. No KKK. No racist USA" and "Americans against hate." At times, they chanted "Hey hey, ho ho, white supremacy has got to go" and "Black lives matter."

"Boston is a beautiful city, but Boston needs to get it together," counterdemonstrator Lewis Goody said. "It has always been a racist city."

The march and rally were largely peaceful except for moments when counterprotesters jeered supporters of President Donald Trump. The rally began at noon on the historic Boston Common.

At one point, police escorted a rally participant wearing an American flag over his shoulders as counterdemonstrators shouted "Shame" and "Boston hates you."

Boston police tweeted at 1:30 p.m.: "Free Speech" rally is officially over. Demonstrators have left the Common."

#UPDATE: "Free Speech" rally is officially over. Demonstrators have left the Common.

Around the same time, helmeted police officers could be seen on news footage moving in to separate rally participants from counterdemonstrators.

At least eight people -- apparently counterprotesters -- were arrested, according to a CNN correspondent and producer on the scene.

The event, which was planned before the violence in Charlottesville, took place amid a heated national debate about racism and the future of Confederate monuments.

Smaller protests were expected in cities throughout the nation.

In Portland, Oregon, hundreds took to the streets Friday night for an "Eclipse Hate" demonstration, which organizers said was intended to show solidarity with the people of Charlottesville, CNN affiliate KPTV reported. The event included a moment of silence for victims of hate.

In Hot Springs, Arkansas, a pro-Confederate rally was planned for Saturday amid heightened security concerns following the clashes in Virginia, according to CNN affiliate KATV.

On Twitter Saturday, Boston Mayor Marty Walsh appealed for calm: "I ask everyone to be peaceful today and respect our City. Love, not hate. We stand together against intolerance."

I ask everyone to be peaceful today and respect our City. Love, not hate. We stand together against intolerance.

After Boston granted a rally permit earlier this week, Walsh issued a warning to the demonstrators: "Make no mistake: we do not welcome any hate groups to Boston and we reject their message."

"We have made it clear that we will not tolerate incitements to violence or any threatening behavior." 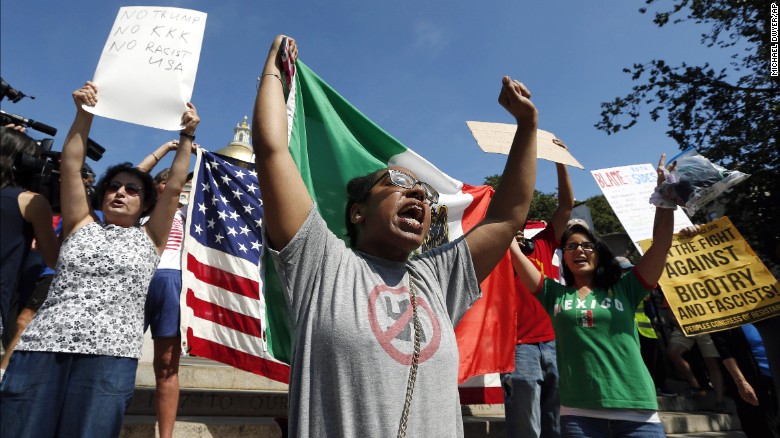 A Facebook page linked to the Boston event identifies participants as a "coalition of libertarians, progressives, conservatives, and independents and we welcome all individuals and organizations from any political affiliations that are willing to peaceably engage in open dialogue about the threats to, and importance of, free speech and civil liberties."

Some of the same groups organized a similar event on the Common in May, where there were two arrests.

One organizer, John Medlar, a student at Fitchburg State University, told CNN affiliate WCVB that his group is libertarian and opposes bigotry and the Ku Klux Klan.

Medlar also told CNN affiliate WBZ, "Contrary to a lot of the rumors out there, the purpose of the rally is to denounce the kind of political violence that we have seen -- a sort of rising tide throughout the country, and particularly most recently in Charlottesville."

The Anti-Defamation League said the Boston rally, as planned, is not a white supremacist event.

"It has been organized under the auspices of the alt lite, which embraces civic nationalism, rather than the alt right, which advocates white nationalism," the ADL said in a blog post.

"The alt lite, sometimes referred to as the New Right, is a loosely-connected movement whose adherents generally shun white supremacist thinking, but who are in step with the alt right in their hatred of feminists and immigrants, among others. Many within the alt lite sphere are virulently anti-Muslim; the group abhors everyone on 'the left' and traffics in conspiracy theories."

Some speakers have dropped out, while others were uninvited after Charlottesville. But rally organizers said on social media that Kyle Chapman, Joe Biggs, US Senate candidate Shiva Ayyadurai and congressional candidate Samson Racioppi were confirmed to speak.

Chapman and Biggs are probably the most controversial.

Chapman is well-known in right-wing circles for arming himself with a stick and confronting anti-fascist demonstrators in Berkeley, California, according to the ADL. Known by the nickname Based Stickman or the Alt Knight, he has urged members of his group to battle left-wing activists, the ADL said.

The counterdemonstration has been organized by an array of groups, including the Coalition to Mobilize and Organize Boston against Trump, the Act Now to Stop War & End Racism Coalition, Boston Democratic Socialists of America and Black Lives Matter, according to a Facebook page for the event.

"As we have seen with the events in Charlottesville and around the country, white nationalists are emboldened by the current political administration and growing police state," organizers wrote on Facebook.

"Rallies and marches organized by white supremacists are more prevalent than in recent years, and -- as always -- it is the most marginalized who are left vulnerable."

Monica Cannon, an organizer with the group Violence in Boston, said activists who participated in last week's Charlottesville event were to attend.

The ADL said in its blog, "Given the heightened tensions in the wake of Charlottesville, the Boston event could certainly see clashes between attendees and counter-protesters, who appear prepared to come out in force."

Walsh, the mayor, and Boston Police Commissioner Williams Evans said the city is prepared should violence break out.

More than 500 police officers -- including some undercover and others with cameras -- were to be on hand.

Backpacks were to be searched and weapons, and objects that could be used as weapons -- including glass containers and flag poles -- were to be banned. 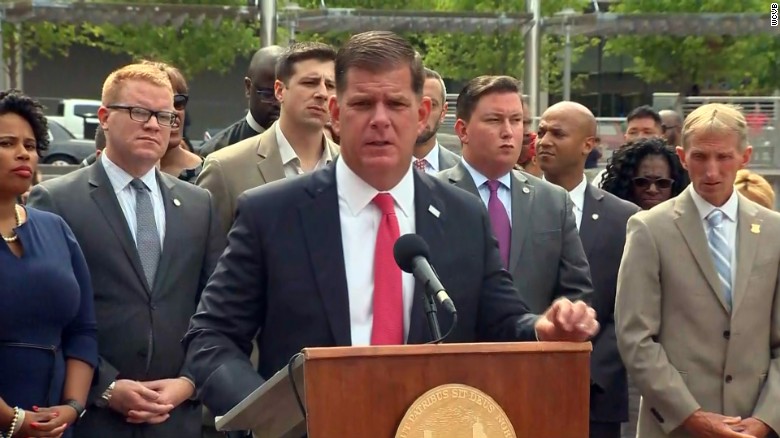 "If anything gets out of hand, we will shut it down," Walsh told reporters Friday.

Walsh said the city had no choice but to issue a rally permit.

"The courts have made it abundantly clear they have a right to gather no matter how repugnant their views are," he said.

He added, "This so-called free speech rally -- some of the people speaking have said some very hurtful things about the Jewish community, about the African-American community, about a whole bunch of other communities. I don't want them here."

Evans said the demonstrators and counterprotesters would be kept apart on the Commons.

"Unfortunately, I think there are going to be a few troublemakers there," he said.

Ann Duplessis, a financial expert and the Senior Vice President of Liberty Bank shares advice on how to build while everything seems to be falling.

WASHINGTON (NEXSTAR/AP) — Negotiators on a huge coronavirus relief bill reported slight progress after talks resumed in the Capitol, with issues like food for the poor and aid to schools struggling to reopen safely assuming a higher profile in the talks.

Multiple obstacles remain, including an impasse on extending a $600-per-week pandemic jobless benefit, funding for the U.S. Postal Service and aid to renters facing eviction. Democratic negotiators spoke of progress Monday at almost the very moment that top Senate Republican Mitch McConnell was slamming them for taking a hard line in the talks.

3AM UPDATE: Hurricane Isaias has weakened to a Tropical Storm, according to the National Hurricane Center.

MYRTLE BEACH, SC (WBTW) - Hurricane Isaias has made landfall just north of the South Carolina border in Ocean Isle, NC, at 11:10 p.m., according to the National Hurricane Center. Winds have remained at 85mph and the storm is now moving north-northwest at 22mph. The hurricane will increase in speed as it moves away overnight.