(CNN Money) — Toyota is using the Super Bowl to showcase new and experimental motorized wheelchairs and other vehicles, including a futuristic flying car.

“The one we show in the ad is a prototype concept car that actually does work,” said Toyota Motor spokesman Russ Koble.

He said it’s a flying version of the company’s compact car prototype, called the i-Road.

The ad also shows a disabled basketball player in a motorized wheelchair called the Exo-Wheel, which the company is experimenting with as a prototype.

The ad also features a man using a motorized wheelchair, called the iBot, to walk down stairs. That’s a prototype that Toyota has been developing in partnership with a company called Deka. None of these are on the market yet, the company said.

The ad features people of different races, ages and abilities. 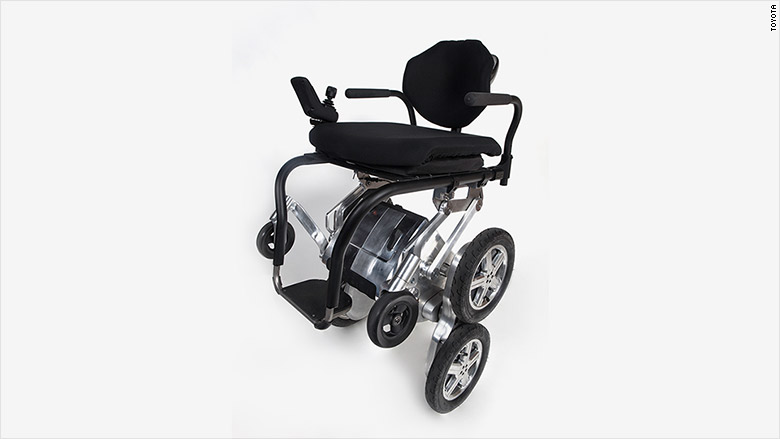 “This is an unprecedented opportunity for our team at Toyota to share messages of unity, friendship, diversity and perseverance,” said Ed Laukes, group vice president of Toyota Marketing for Toyota Motor North America, in a statement.

Mobility is the theme of the ad, which has a voiceover saying, “When we’re free to move, anything is possible.”

Toyota has three Super Bowl ads this year. The company uses that same slogan in a one-minute spot titled “Good Odds,” which tells the story of Lauren Woolstencroft, a Paralympic skier from Canada who has won ten medals, including eight gold.

The ad follows her progress from a baby born with stumps for legs and only one arm, to learning to walk, then learning to dance and ski with prosthetic limbs. The ad reveals at the end that she’s an athlete in the Paralympics.

“I hope that my story encourages and inspires others around the world to pursue their passions, and reach for their own personal best,” said Woolstencroft in a statement.

NBC is broadcasting the football game on Sunday between the New England Patriots and the Philadelphia Eagles and charging advertisers more than $5 million for 30-second spots.

The Paralympics take place from March 9 to 18, after the Winter Olympics, in PyeongChang, South Korea.

Diversity is also a central theme in Super Bowl ads coming from Coca-Cola, featuring an interracial couple in a spot inspired by the iconic “Hilltop” ad from 1971.