XINJIANG, China — No long beards. No veils in public places. No home-schooling.

China is intensifying its crackdown against what it deems religious extremism in the far-west province of Xinjiang, which is home to 10 million Muslims.

The latest measures — outlined in a sweeping new anti-extremism legislation — take effect Saturday and come on the heels of a series of steps to increase surveillance in the region that include the surrender of passports and mandatory GPS trackers in cars.

What are the latest measures?

The new legislation, which was published on a regional news portal run by the provincial government, appears to standardize, and expand across the whole province, piecemeal rules and regulations that have been enacted in individual towns and cities.

Advocating or propagating extremist thoughts Wearing or forcing others to wear full-face coverings Hyping up religious fanaticism through growing beards or choosing names in an abnormal way Not allowing children to receive state education, interfering with state education; Deliberately interfering or harming the implementation of family planning policies; Publishing, downloading or reading articles, publications and audio-video material containing extremist content; Rejecting or refusing state products and services that include radio and television programming.

The law didn’t explain these measures in detail or define abnormal, but the English-language state-run China Daily did say that long beards would be banned “as they are deemed to promote extremism.” 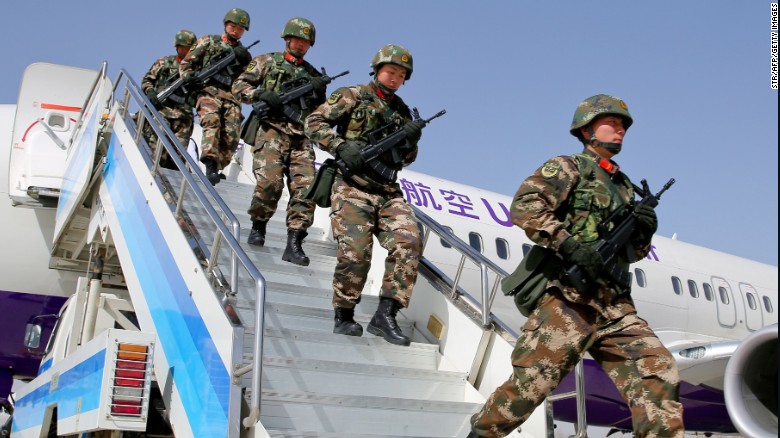 Why is China so concerned?

Hundreds of people have been killed in Xinjiang in recent years; the government describes the perpetrators as terrorists inspired by religious extremism.

There has been a spate of high-profile attacks involving ethnic Uyghurs, a Turkic-speaking minority, outside the province.

These include a 2014 attack outside a rail station in the southwestern city of Kunming that killed 31 people, and an attack in Beijing in 2013 when a car drove into a crowd of tourists and killed five people. 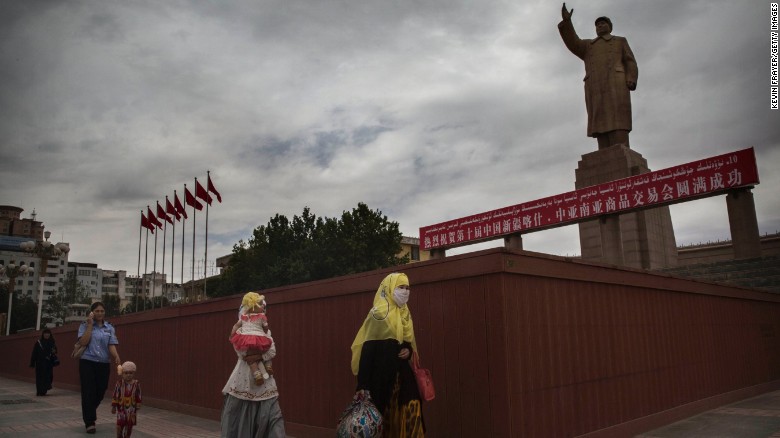 In March, President Xi Jinping called for a “great wall of iron” to safeguard the region’s stability.

Xinjiang, a resource-rich province, plays a key role in the “One Belt, One Road” initiative championed by Xi. The project aims to improve economic ties with central Asia and Xi wants no disruption to a landmark international conference he is holding on it in May.

“We’d be foolish to deny that China has a problem with terrorists,” Leibold told CNN.

“But I think the Communist Party is exaggerating the threat of radical Islam and they are turning up the heat in assimilating the Uyghurs into the Chinese nation state.” 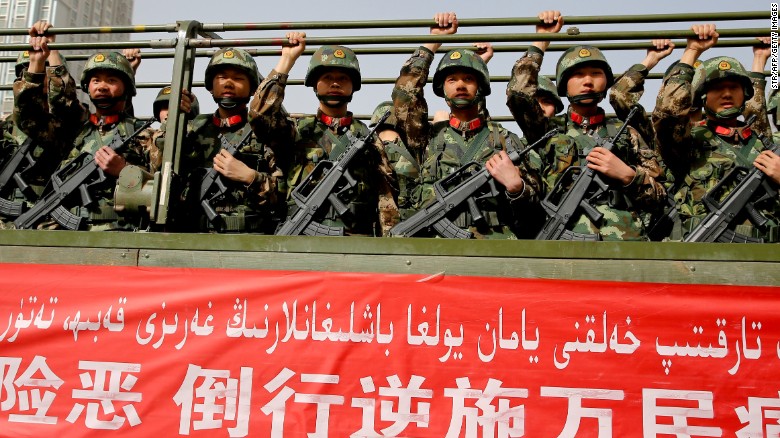 Who are the Uyghurs?

The Uyghurs are largely Muslims, who are the dominant ethnic group in Xinjiang, a large autonomous region that borders Russia, Mongolia, central and south Asia.

Uyghurs regard themselves as linguistically, culturally and ethnically close to central Asia, despite a long history of Chinese rule.

Tensions have arisen between Uyghurs and the Han, the predominant ethnic group in China, who have migrated to Xinjiang in large numbers over the past 60 years.

A 2011 report by the US Congressional-Executive Commission on China said that Han workers have taken most of the new jobs and unemployment among Uyghurs is high. Activists say China has been taking measures to undermine the Uyghur language, culture and religious practices including restrictions on observing Ramadan.

In a response to a question on whether the Chinese government was seeking to repress the Muslim faith in Xinjiang, Lu Kang, China’s foreign ministry spokesman said on Wednesday that “the objective fact is that the people of all ethnicities in Xinjiang, just like the people living in other regions of China, are enjoying better lives, working conditions and brighter prospect for development.”

“We oppose the approach of linking terrorism with a certain ethnicity or a certain religion,” he added.

Leibold said the government has been slowly increasing measures since July 2009, when some 200 people were killed in ethnic riots that were prompted by long-simmering resentment many Uyghurs have for the Han. 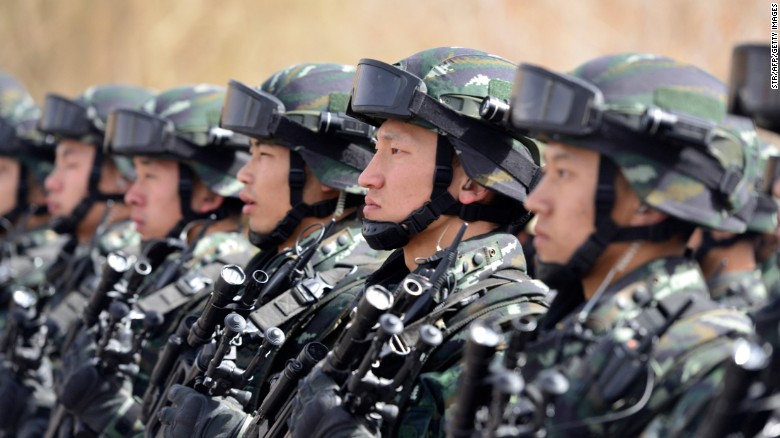 Are there Uyghur terror groups?

Beijing has blamed the violence on Islamic militants, led by the East Turkestan Islamic Movement (ETIM), which the US State Department listed as a terrorist organization in 2002 a year after the September 11 attacks.

But many analysts dispute its characterization as an Al Qaeda or ISIS-style group.

In February, a 28-minute video analyzed by the SITE Intelligence Group appeared to show Uyghur militants threatening to return to China to “shed blood like rivers.” SITE said it was produced by ISIS.

When asked about the video, China’s Foreign Ministry spokesman Geng Shuang said he wasn’t aware of it, but said: “East Turkestan terrorist forces represented by the East Turkestan Islamic Movement pose a grave threat on security and stability of China and the region.”

The China Daily, a state-run newspaper published an editorial that went further: “the video lends further credence to Beijing’s claim, especially the oft-ignored assertions of links between domestic and foreign terrorist elements.”

China has long asserted Uyghur fighters have joined the ranks of ISIS in Syria and Iraq. New America, a US think tank, estimates that 100 Uyghurs having gone abroad to fight for the ISIS cause, while the state-run Global Times put the figure at about 300.

How do people in Xinjiang feel about this?

The Chinese government tightly controls access to the area.

Journalists are closely monitored when in the province, and sometimes are prohibited from accessing certain parts of the region all together. The same applies for non governmental organizations.

Leibold says the new security measures drive resentment underground and widens the gulf of misunderstanding and between the Chinese state and Uyghurs.

“This is an example of a surveillance society that we’ve never seen across China,” he said. 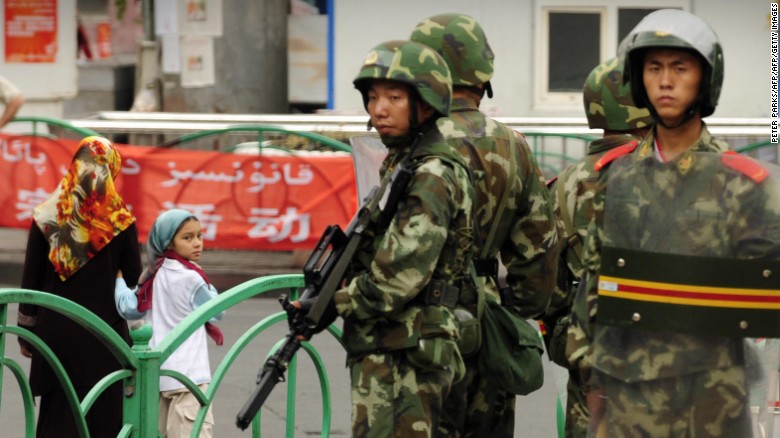 However, not all Xinjiang residents see Beijing’s security build-up as a problem.

“I don’t think they’re restrictions,” a 30-year-old Uyghur woman in Xinjiang’s Manasi County told CNN earlier this month on the condition of anonymity because she’s not authorized to speak to media by her employer. “I think the government is doing its job.”

She said while she’s noticed a steady influx of ethnic Han Chinese move into the region over the years, but she hasn’t felt discriminated — either in the Chinese school she attended or in her job as a nurse.

She added she didn’t mind attending the mandatory weekly flag raising ceremony, because it’s the same thing she did in school growing up, and thinks installing GPS in vehicles and other surveillance devices is for the greater good.

Dolkun Isa, Secretary General of the World Uyghur Congress (WUC), an exile group based in Germany, said that Chinese news coverage focuses on violence perpetrated by a tiny fraction of the population and “this shapes how some view Uyghurs generally — though clearly unfairly.”

Houston (CW39) Calling it the little robot that could is an understatement. The Mars Rover "Perseverance" has exceeded another milestone this week with help from a very special instrument.

A toaster-size, experimental instrument aboard Perseverance called the Mars Oxygen In-Situ Resource Utilization Experiment or (MOXIE) created a small amount of oxygen, on the planet. The test took place April 20, the 60th Martian day, or sol, since the mission landed Feb. 18. So, how does it work? The easiest way to explain it... It simply converts some of the Red Planet’s thin, carbon dioxide-rich atmosphere into oxygen.

HOUSTON (CW39) The National Weather Service is still monitoring the potential for some strong to severe storms across parts of the region on Friday.