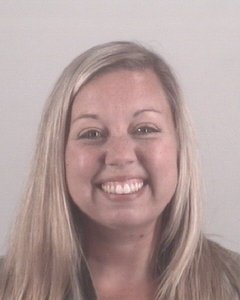 BEDFORD (KDAF)— A now-former HEB school counselor has been arrested after a student’s mother caught the woman in bed with her teenage son, police say.

Shannon Hathaway, who was a 33-year-old counselor at Hurst-Euless-Bedford ISD’s Harwood Junior High School, was booked into the Tarrant County Jail on Thursday, accused of improper relationship between educator and student.

Bedford police issued a warrant Wednesday for Hathaway’s arrest for an alleged sexual relationship with a ninth-grade student. Police say the 17-year-old student’s mother walked in on her son and Hathaway naked in bed together. The teen had attended Harwood Junior High the previous school year, 2016-2017, according to the Fort Worth Star-Telegram.

Parents in the district were notified via automated voice mail Thursday morning, with Hathaway being referred to as a ‘former employee.’ The Texas State Board of Education has been made aware of the investigation and although the district believes this alleged physical relationship to be an isolated incident, parents are encouraged to talk to their children.

Country music firebrand Charlie Daniels has died of a stroke at 83; had hit with ‘Devil Went Down to Georgia.’

The hit was released in 1979 and the band was featured in 1980's classic film "Urban Cowboy," filmed in Pasadena, Texas. Here's a look video from the film taped at Gilley's in Pasadena.

FARGO, N.D. (AP) - A federal judge on Monday sided with the Standing Rock Sioux Tribe and ordered the Dakota Access pipeline to shut down until more environmental review is done.

In a 24-page order, U.S. District Judge James Boasberg wrote that he was “mindful of the disruption" that shutting down a pipeline that has been in operation for three years would cause, but that it must be done within 30 days. His order comes after he said in April that the pipeline remained “highly controversial” under federal environmental law, and a more extensive review was necessary than the assessment that was done.

AUSTIN (KXAN) — A juvenile girl has been charged with murder in connection with the death of a 59-year-old man in southwest Austin in the early hours of June 20, according to the Austin Police Department.

Around 4:33 a.m. on June 20, APD responded to a call of gun shots in the 3800 block of Alexandria Drive near Brodie Lane. Once on the scene, authorities found David Dunn with significant trauma and a gunshot wound. Dunn died at the scene around 5 a.m.

Second stimulus check: Where we stand as July begins