HARRIS COUNTY, Texas — The Harris County Constable’s Office has arrested two men accused of impersonating police officers at a motel Monday in the north Houston area, according to investigators.

Constable deputies responded to a robbery call at the North Villa Motel in the 16500 block of the North Freeway.  Investigators said a group of men were banging on doors and identifying themselves as Houston police officers. 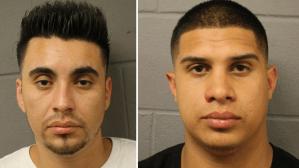 The suspects were later identified as Noe Arugeta, 31, and Douglas Aguilar, 28.

Deputies are continuing to investigate if Argueta and Aguilar may have used these same tactics on other victims in the area.

Both men were charged with impersonating a peace officer and booked into the Harris County Jail.

Argueta was given a $5,000 bond and Agular received no bond.

HOUSTON -- Space Center Houston is officially back open after temporarily having to close during the coronavirus pandemic.  The popular non-profit tourist destination has new safety protocols in place, including social distancing practices, a new touch-less entry with self-scan turnstiles, increased hand sanitizer stations, shields at ticket counters, and increased daily cleaning. CW39 Houston's Maggie Flecknoe gives us an inside glimpse. Plus, a look at some new attractions.  For more…

Abbott made the stop after he held a news conference in El Paso to provide an update on the COVID-19 response in Texas.

Services for Vanessa Guillen are scheduled for noon today at Chavez High School. A casket containing Vanessa's remains will be present. Community members, elected officials and friends of Guillen are expected to be in attendance. The public is invited to attend. However, attendees are required to wear masks and limited to two per party due to limited space.