BEAUMONT, Texas — For many victims of Hurricane Harvey, it was the memories of lifetimes that washed away in raging floodwaters.

For Kyle Parry and Stephanie Hoekstra it was their future — their wedding, planned for next week; and her wedding dress, stored in his home — that lay in the flood’s path.

As the water in Parry’s home in Lumberton, near Beaumont, Texas, began to rise Monday, he salvaged what he could. His house had avoided the brunt of the storm until then, and the 35-year-old firefighter had worked back-to-back shifts for days rescuing people from their homes.

He elevated his beloved dirt bikes in his kitchen, he took his two dogs and their six puppies, and, before evacuating, he went into the spare room. He grabbed his fiancee’s wedding dress and stuffed it into the top corner of the wardrobe, hoping it would stay dry.

“A couple of days go by and I needed to get back there. I needed to see the house for myself,” Parry said.

On Thursday, he got on a boat with his friend and as he moved through his flooded neighborhood he knew things were not good. “I got out of the boat and I am neck-deep in water, I open the door of my house and I know it’s a complete loss.” 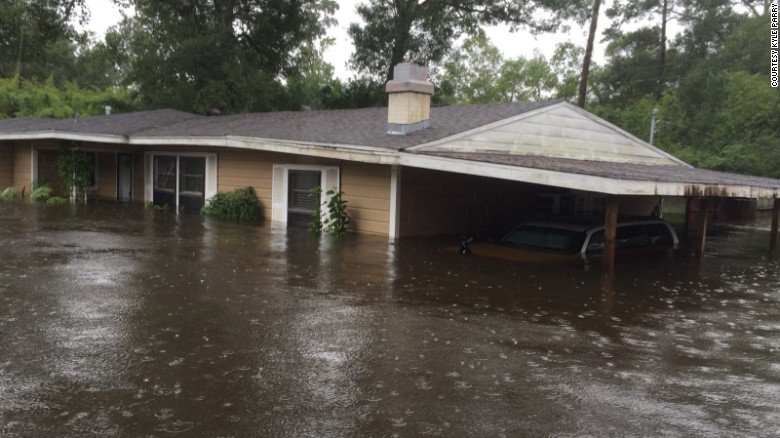 Hoekstra had come down weeks earlier from Ontario, Canada, where she lives with her two children, with her dress and put it in the wardrobe. She warned Parry not to take a peek. Back in Ontario, she watched anxiously on a Facebook livestream as her fiance surveyed the damage.

“All the stuff we had just bought for the wedding — the plates, the napkins, everything — was just floating around Kyle’s house,” she recounted. “Of course it’s only stuff and stuff can be replaced, but it was hard to watch because we struggled this past year to get everything together to make it happen. It was all just gone.”

As Parry walked through his home, with water up to his chest in some places, his two dirt bikes were almost submerged in water. “I thought they would be safe up here,” he quipped.

Parry had prepared his bride-to-be for the worst earlier in the day, telling her, “I am sorry babe, I think the water is up to the roof. I think everything is gone. I think the dress is gone.”

In his flooded home, he navigated past floating furniture and now-destroyed paintings by his grandfather, and made his way to the wardrobe in the spare room.

The dress, still bundled in the top corner, had stayed dry — just inches above the water.

Pictures show Parry later back in the boat, on his way to Lumberton Central Fire Station — now his temporary home — the dress safely inside. 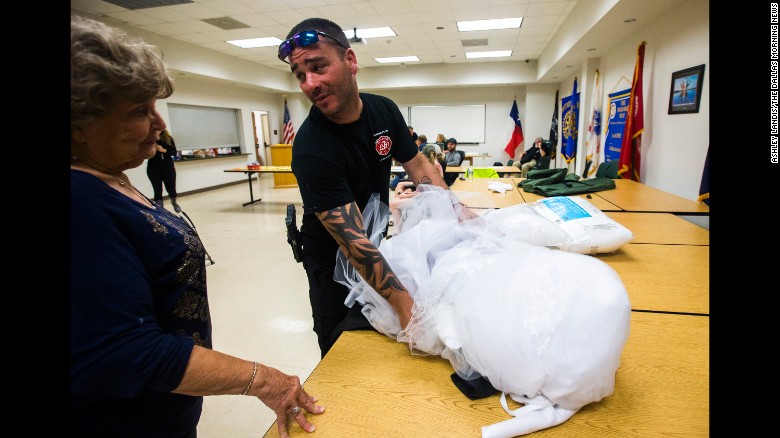 With only the dress, the couple have postponed their wedding. Parry says he had no renters’ insurance and his landlord had no flood insurance.

“There’s a lot of work to do here, helping neighbors and helping our community,” he told CNN. “I need to find a place to live. I need to buy some clothes. All I have now is a pair of shorts, some underwear and my two fire department uniforms.”

Hoekstra says she hopes to travel to Texas soon.

“We love each other so much,” she said. “We’ll get married another day. We’ll be OK.”

Schumer pledges to keep senators in Washington until …

Schumer pledges to keep senators in Washington until …

These are the best Christmas light displays in Texas: …

How to choose your electric company

Boozy Monopoly for the holiday

Tanks for Watching word of the day is FRIEND – Enter …

These are the best Christmas light displays in Texas: …

Happening This Weekend: Things to do around Houston

‘Clerical error’ may have led to Delphi arrest delay

How to choose your electric company

Boozy Monopoly for the holiday

Thursday’s headlines you may have missed

HIV/AIDS affecting not only adults

What to do if you lose traction on wintry roads

What roads will close for the Thanksgiving Parade?

Weather gets worse before it gets better

Best gifts to give a host

Thursday’s headlines you may have missed