HOUSTON — It's gotta feel good to be home! William Nguyen, the student who was arrested in Vietnam for a political protest, is finally back in his hometown, Houston.

"I didn't know I was coming home until the verdict was announced," Nguyen said.

Nguyen was studying in Singapore but vacationing in Vietnam when he was arrested in June for participating in a protest against new economic policies that could give China control in Vietnam.

"They had me under the disturbing public order statute," he said. "Which had me liable for two to seven years in Vietnamese prison."

Court officials said Nguyen confessed to the crime and showed remorse, so they gave him a lenient sentence.

After a social media campaign #FreeWillNguyen and a push from politicians, including Secretary of State Mike Pompeo and Texas Sens. Ted Cruz and John Cornyn, Nguyen was released from jail and kicked out of the country.

"We are deeply grateful for Congressman Al Green and his staff members," sister Victoria Nguyen said in a statement. "They have shown us what true southern hospitality is, all without expecting anything in return. They genuinely and intently helped us every step of the way. From their Houston office to their D.C. office, every staff member went above and beyond their line of duties to help us and all without recognition. Therefore, we would like to personally recognize his office for their gracious support, and we are forever in debt to every single one of their staff members.” 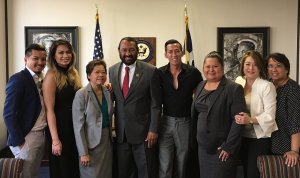 When 16-year-old Newt Johnson found out his little sister was sick, he was ready to do anything for her. That included growing out his hair until it was long enough to make a wig, in case she needed it. But because of his school's policies, that also meant withdrawing from his high school. His sister and best friend, Maggie Johnson, was recently diagnosed with Wegener's disease. The rare auto immune…

Tapeworm removed from Austin man’s brain after months of headaches

AUSTIN (KXAN) — An Austin man knew something was wrong when he fainted in the middle of a soccer game last year. He’d been dealing with awful headaches and “feeling off,” but his tumble during soccer prompted him to check it out. An MRI revealed the surprise culprit — a tapeworm in his brain. The man  — whose name hasn’t been released — was shocked. Dr. Jordan Amadio, neurosurgeon at…