HARRIS COUNTY, Texas — Four people have been arrested and at least eight others are wanted for felony charges after investigators uncovered a crime ring responsible for the thefts of hundreds of vehicle tires and wheels, the Harris County Pct. 4 Constable’s Office confirmed. 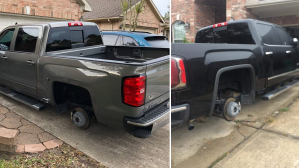 The crime ring has been the subject of a 14 month investigation. Investigators said tires and wheels were stolen while the vehicles set in the victims’ driveway.

“We determined this by eyewitness testimony and by video surveillance that many homes have now,” Harris County Precinct 4 Constable Mark Herman said.

“I can tell you that we’re going to end up confiscating probably the entire Martinez tire shop,” Herman added.

The younger Martinez is charged with possession of a controlled substance.

In December 2016, constable deputies responded to a tire and wheel theft in progress call. Responding officers spotted the suspected vehicle and there was a brief chased that ended when the suspects got out of the vehicle and ran away, deputies said. Although the suspects managed to escape, investigators were able to identify two of the suspects using DNA evidence.

The following people are still wanted:

Constable deputies have executed search warrants on  multiple locations early this morning  and are in the process of recovering  stolen property and critical evidence related to the organized criminal activity.

Eleven law enforcement agencies across Texas were involved in the investigation.

(Motor Authority) - Performance SUVs are common today, but in the late 1960s there was only the Jerrari.

This unique combination of a 1969 Jeep Wagoneer and Ferrari 365 GT 2+2 was decades ahead of its time. Now the one-off SUV is for sale through Classic Driver Market.

HOUSTON (CW39) A rare June cold front brought heavy downpours to Houston this morning. Rain tapers off as the front heads south, where it will stall, then it heads back northward as a warm front later today. As that happens, scattered showers and storms will again be possible.

Despite "cooler" temps in the upper 80s this afternoon, it will still feel like 100.