HOUSTON — JJ Watt and Jose Altuve have been named Sports Illustrated’s 2017 Sportsperson of the Year, the publication announced Monday. The players are being recognized for their contributions both on and off the field. 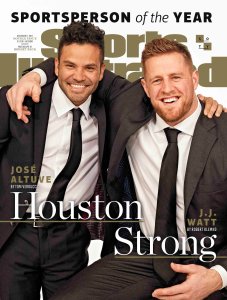 Watt raised more than $37 million in Hurricane Harvey relief aid and served as a beacon for what an athlete can do with their platform beyond sports.  Watt is the seventh NFL athlete to be named Sportsperson of the Year, joining the likes of Tom Brady, Peyton Manning and Joe Montana.

Altuve, the Houston Astros’ second baseman and American League MVP, is an inspirational story about a consistently underestimated player who rose to the top of his sport. The three-time batting champion was a key part of the team that brought Houston its first World Series Championship. He is recognized for giving back and inspiring a community when it needed it most.

Altuve is the 17th MLB athlete to be named Sportsperson of the Year, joining names like Derek Jeter, Cal Ripken Jr. and Sandy Koufax.

“The city of Houston has treated me really good,” Altuve said in an SI interview. “I felt at that time that I owed them something. So when they were having a hard time, I wanted to give something back to them.”

Humbled & Honored.
Houston, this is for you and this is for the hundreds of thousands of people who donated from all over the world. pic.twitter.com/GuR6uB0Y6J

Watt and Altuve will accept the honor at SI’s Sportsperson of the Year Award Show on Dec. 5 at Barclays Center in New York.

Since 1954, Sports Illustrated has presented the annual Sportsperson of the Year award to the player, coach or team who has best personified the ideals of athletic achievement and sportsmanship, on and off the field.

They're teaming up to provide new school supplies to local children in need. Walmart and the Salvation Army's "Stuff The Bus" campaign starts today through Sunday at Walmart supercenters in Galveston, Kemah and League City.

After shoppers purchase school supplies in Walmart, they can drop off the items in Salvation Army's collection bins in front of the stores.

WASHINGTON (AP) — The U.S. Postal Service says it lost $2.2 billion in the three months that ended in June as the beleaguered agency — hit hard by the coronavirus pandemic — piles up financial losses that officials warn could top $20 billion over two years.

"Our financial position is dire, stemming from substantial declines in mail volume, a broken business model and a management strategy that has not adequately addressed these issues,'' Louis DeJoy, the new postmaster general, said Friday in his first public remarks since taking the job in June.

Religious group claims Beyonce has ties to Satan and the occult