(CNN)--National Transportation Safety Board investigators are trying to determine what caused a tragic accident that claimed the lives of 13 senior citizens after their church minibus collided with a pickup truck in the Texas Hill Country.

Two people were injured in Wednesday's accident, including the driver of the large white pickup that collided with the bus, said Sgt. Conrad Hein with the Texas Department of Public Safety.

The NTSB is investigating today’s highway accident in Concan, Texas.

"It was a really gruesome scene," motorist Rick Ballesteros of Uvalde, who drove up to the crash site, told CNN affiliate KABB.

Sgt. Orlando Moreno of the public safety department told reporters that 12 people, including the bus driver, died at the scene. The 13th victim died at a San Antonio hospital, about 75 miles away. One passenger in the church bus survived and is in critical condition, according to the Texas Department of Public Safety.

At least three calls were made to 911 dispatchers reporting an "erratic driver" prior to the accident, officials said.

Real County (Texas) Constable Nathan Johnson says that the first call was made by a motorist who reported seeing the pickup truck driver operating the vehicle in an "erratic" way while traveling north on Highway 83, through Real County.

At least one other call followed. Real County officers were out looking for the vehicle, but didn't see it.

Johnson says another call came in to the Uvalde 911 dispatchers about the same vehicle.

The next call to emergency officials reported the crash between the minibus and the pickup truck. 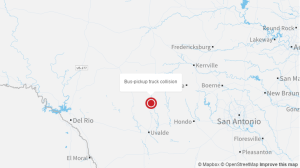 The bus was carrying congregants of the First Baptist Church in New Braunfels, who were coming back from a retreat, the church said on its Facebook page.

Moreno said the bus was traveling south when the northbound pickup truck veered into its lane and hit the bus. The accident happened on a curve where the speed limit is 65, but the cause of the accident is still under investigation, authorities said.

The bus was coming from the Alto Frio Baptist Encampment in Leakey when the accident occurred near Garner State Park, about 7 miles away, on a two-lane section of Highway 83.

"With heavy hearts our thoughts and prayers are with the victims' families and First Baptist Church of New Braunfels church family in the grieving of the tragic accident that occurred Wednesday afternoon," Alto Rio Baptist Encampment said in a statement.

The church canceled events, but members gathered inside Wednesday night.

Senior Pastor Brad McLean said they were doing what church families do during crises.

"We are ministering to family members to help them deal with this tragedy. Counselors will be on hand at the church tomorrow," the church wrote. "If you're a Christian, you can pray for those who lost their loved ones and for the church family."

The lone survivor from the bus, 64-year-old Rose Mary Harris of New Braunfels, is still listed in critical condition at a hospital in San Antonio, the DPS said. The driver of the pickup truck, 20-year-old Jack Dillon Young, is in serious condition, according to University Health System spokesman Don Finley.

Gov. Greg Abbott sent his condolences to the victims' families.

"We are saddened by the loss of life and our hearts go out to all those affected," Abbott said.

HOUSTON (CW39) -- It’s still hard to believe nearly 155,000 homes flooded during Hurricane Harvey costing billions of dollars in repairs. It’s no secret that a lot of houses in the Houston area flood, but now there’s a company helping keep your home high and dry, Shannon Lanier went LIVE today to show you a new product on the market that may just take away your flooding fears.

Here is our exclusive interview with Tasha Fuller,  the CEO and Co-Founder of FloodFrame USA.

HOUSTON (CW39)-- We all look to save money when we can, especially during this pandemic where many of us have been financially impacted.

According to research by Value Penguin, Lending Tree's insurance website, nearly 70% of drivers say they are driving significantly less than usual. That means less gas and less wear and tear on your vehicle, but what about your insurance? If you are driving less, can you save any money?

Q&A: What exactly were the results of Breonna Taylor investigation?