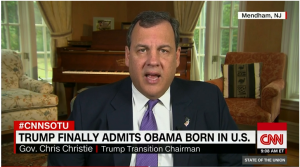 Trump for years elevated false claims that Obama wasn’t born in the United States, raising it repeatedly in interviews and on Twitter. In 2011, Obama released a copy of his birth certificate to put to rest what many considered fringe conspiracy theories aimed at undermining his legitimacy as president.

Though Trump had been asked whether he now believes Obama was born in the United States as recently as 2016 and hadn’t affirmed that position, Christie said, “It’s just not true that he kept it up for five years.”

“No, Jake. It wasn’t like he was talking about it on a regular basis … And when the issue was raised, he made very clear the other day what his position is,” Christie said.

Christie also said it was “an issue that Mrs. Clinton also injected” into the 2008 Democratic primary against Obama, which is false.

Trump’s running mate, Indiana Gov. Mike Pence, stuck to a similar line in an interview with ABC’s Martha Raddatz on “This Week.”

“This is not what the American people are talking about. Donald Trump put this issue to an end yesterday in Washington, D.C.,” Pence said.

He also declared birtherism “over” and denied Trump has any responsibility it. “Throughout this campaign, he hasn’t been talking about it,” Pence said.

“When Donald Trump says the first African-American president is not a citizen, that is so painful to so many people who still have deep feelings about that dark chapter in American life,” Kaine told Tapper later on “State of the Union.”

“And he either believed what he said for five years, which showed that he’s either incredibly gullible or conspiratorial, or he didn’t believe it, in which case he was just trying to prey upon people’s darkest emotion,” he said.

“Sidney Blumenthal has categorically denied that, but Sidney’s not running for president. Let’s talk about Donald Trump,” Kaine said.

Host John Dickerson asked: “Donald Trump advocated something for five years that was a lie. Why did he do that?”

Conway said: “Well, you’re going to have to ask him. But, again, I think that this is a sideshow now that the media seem obsessed with, John, respectfully. And, again, he put everything out on the table on Friday. Those are his words. He does things on his terms, on his time line.”