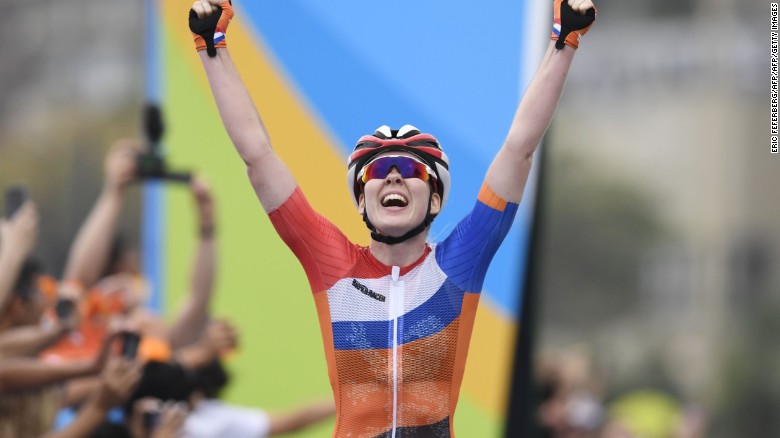 RIO DE JANEIRO — It was a tale of contrasting fortunes for two Dutch cyclists.

While Anna van der Breggen celebrated clinching gold in the women’s road, the mood at the finish line was subdued after Annemiek van Vleuten crashed while leading the race with just 11 kilometers to go.

On the same descent that left Italy’s Vincenzo Nibali with two broken collarbones just 24 hours earlier, Van Vleuten flew head-first over her handlebars and saw her hopes of a first Olympic title disappear.

The Dutch cycling federation tweeted after the race that Van Vleuten was OK and had been taken to a hospital. It didn’t clarify what injuries — if any — she suffered.

Her crash left American Mara Abbott in pole position but she couldn’t hold onto it. She was reeled in by van der Breggen, Sweden’s Emma Johansson and Italian Emma Longo Borghini as the riders streaked along Copacabana toward the finish line.

It was van der Breggen who pipped Johansson to the gold medal, leaving Borghini in third. Abbott finished fourth.

The buildup to the race was dominated by Lizzie Armitstead, who, it was revealed, had missed three drugs test in the last 10 months.

The Briton avoided a ban that would have prevented her competing at the Games by appealing to the Court of Arbitration for Sport on the grounds that her first missed test (in August 2015) was the fault of doping authorities.

Court of Arbitration for Sport agreed, freeing Armitstead to climb into the saddle Sunday, when the world champion finished fifth.