(CNN) -- San Francisco 49ers quarterback Colin Kaepernick sat in protest during the national anthem for a pre-season game, saying he would not honor a song nor "show pride in a flag for a country that oppresses black people and people of color."

Referencing to the recent shooting deaths of African-Americans by police, he told NFL Media that his conscience would not allow him to partake in the pre-game ceremony Friday against the Green Bay Packers.

"To me, this is bigger than football and it would be selfish on my part to look the other way. There are bodies in the street and people getting paid leave and getting away with murder," he said.

An image if the 28-year-old sitting -- he is wearing number 7 -- was posted on Twitter. 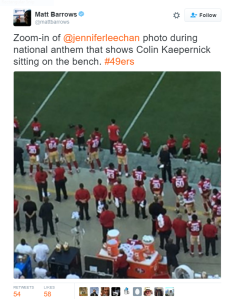 The player said he was fully aware of the controversy he was courting with his decision.

"This is not something that I am going to run by anybody," he said. "I am not looking for approval. I have to stand up for people that are oppressed. ... If they take football away, my endorsements from me, I know that I stood up for what is right."

The athlete is active on Twitter, usually retweeting other users' posts on race relations in the US. His decision not to stand has elicited comments both in support and against his decision.

"As if I needed another reason to love Colin Kaepernick," one supporter tweeted. 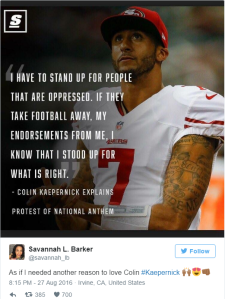 Another user, less enamored with his protest, said the 49ers star should "just leave America to the Americans," Saying that he showed "disrespect to team, sport, fans."

Kaepernick is bi-racial, the NFL media report notes, and was adopted and raised in a white family.

His team released a statement saying it respected his decision.

"The national anthem is and always will be a special part of the pre-game ceremony. It is an opportunity to honor our country and reflect on the great liberties we are afforded as its citizens. In respecting such American principles as freedom of religion and freedom of expression, we recognize the right of an individual to choose and participate, or not, in our celebration of the national anthem."

The NFL also released a statement saying players are encouraged, but not required to stand during the playing of The Star-Spangled Banner, which is played before every professional sporting event in the country.

WATCH LIVE: Authorities give update on the death of George Floyd amidst violent protests in Minneapolis