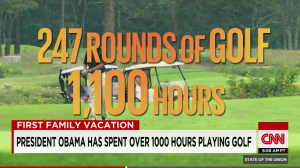 EDGARTOWN, Massachusetts — As he descends into vacation mode, President Barack Obama is disclosing for the first time a closely held secret: his golf handicap.

The commander in chief told Golf Channel’s David Feherty he’s an “honest 13” — an improvement over his reported 17-handicap when he took office that puts him in line with his Oval Office predecessors.

“I think my irons are good, my drive is straight but unimpressive in length, and my putting’s decent, chipping is OK,” Obama told Feherty. “My sand game is terrible.”

Obama is due to play his 300th round of golf as president on Martha’s Vineyard this week, according to statistics compiled by CBS correspondent and White House historian Mark Knoller. 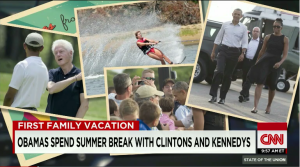 Cloudy skies prevented the President from playing a round upon arriving on the island Saturday, but sunny skies were forecast for the rest of the week.

In the interview that aired Sunday, Obama claimed he didn’t “practice that much,” though he’s played more and more as his tenure winds down. That includes rounds on vacation, as well as weekend play around Washington and at various destinations in the United States.

He played his first foreign round of golf as President in April when he joined then-British Prime Minister David Cameron at a course outside London.

The frequency of his outings haven’t gone unnoticed.

“He plays more golf than professionals that play for a living,” Republican presidential nominee Donald Trump chided during a campaign speech in New Hampshire on Saturday.

That’s not an uncommon criticism for presidents. Almost every president dating back decades has enjoyed golf — from Franklin D. Roosevelt, who oversaw the construction of public courses under his public works program, to George W. Bush, who played early in his presidency before swearing off the game during the Iraq War.

Most presidents have played at around Obama’s level. Ronald Reagan, Richard Nixon and Gerald Ford were all said to have 12-handicaps while in office. John F. Kennedy was estimated around a 14. And Clinton at his peak was a 10, although his partners often whispered about his propensity for fudging his scores.

Trump, who owns golf courses across the United States and in Europe, has a 3-handicap, according to the Boston Globe.

Obama has previously kept quiet about the quality of his play. In February, a reporter asked about his round the notoriously difficult TPC Stadium Court outside Palm Springs.

“My score is classified,” he said.