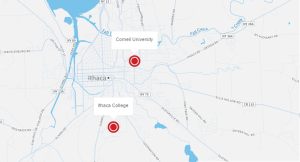 (CNN) — One Ithaca College student was killed and another was injured after being stabbed during a “large fight” on the nearby Cornell University campus early Sunday in Ithaca, New York, officials from both schools said.

Cornell University Police were called to the intersection in front of the Ivy League school’s Olin Hall, which houses dormitories for medical and graduate students as well as Cornell’s school of chemical and biomolecular engineering, just before 2 a.m. There, they found two men had been stabbed, according to a police news release.

First responders treated the victims, and police recovered the weapon used, the news release said. Efforts to obtain information on the suspect are ongoing, police said.

One victim was sent to a local hospital for treatment of “serious injuries,” while the other was flown to Upstate Medical Center, a regional trauma center, to be treated for several stab wounds.

Ithaca College President Tom Rochon confirmed both victims were students at the school, located a couple of miles south of Cornell. He also confirmed that one of the students died at Cayuga Medical Center, while the student flown to the trauma center was treated for non-life-threatening injuries.

The injured student was released following treatment, the Ithaca Police Department said. A homicide investigation is now under way, and anyone who witnessed the altercation or captured it on cell phone video is encouraged to contact Ithaca police.

Police and Rochon said they were withholding the students’ identities until their families are notified.

“I hope you will hold these students — along with their families, friends, classmates, and professors — in your thoughts and prayers at this difficult and tragic time,” Rochon’s statement said.

“There is nothing more important than the safety of our community; as such, this incident is deeply disturbing,” said Ryan Lombardi, Cornell’s vice president for student and campus life, in a statement posted online. “Please be sure to take care of yourselves and each other throughout the coming days.”

WATCH LIVE: Authorities give update on the death of George Floyd amidst violent protests in Minneapolis