Park left the mansion known as the Blue House and went to her private home in southern Seoul, according to her spokesman Kim Dong-jo.

Park said she is “sorry that I couldn’t fulfill my duty as President until the end,” Congressman Min Kyung-wook said on her behalf in front of Park’s private home, where crowds chanted support for the departing leader. 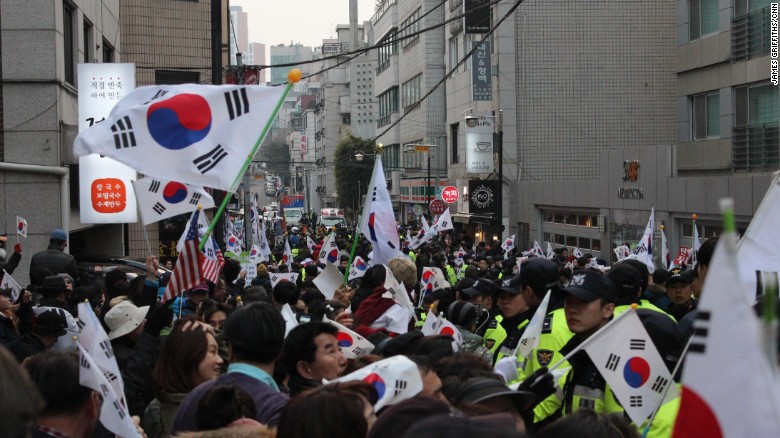 “I thank people who have supported and believed in me,” Park’s statement said. “I will accept all the results. It will take time. but I believe that truth will definitely come out.”

She left office after a Constitutional Court on Friday upheld a vote by lawmakers to impeach her over allegations of corruption and cronyism.

North Korea praised her removal, describing it as a “destructive end” for the nation’s first female head of state. 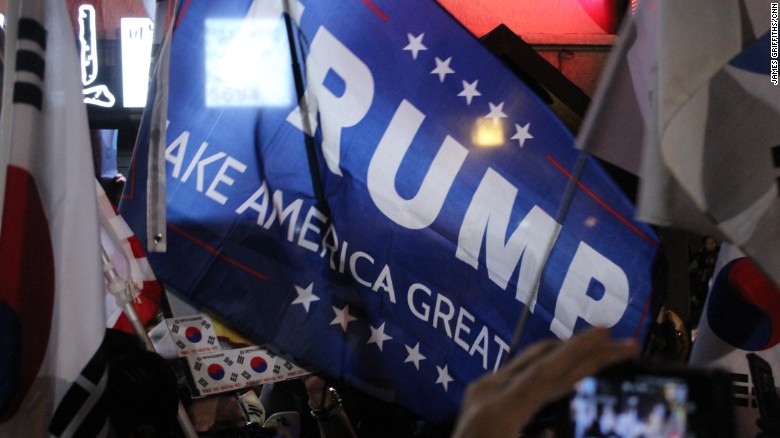 In a statement on state media Saturday, a North Korean official described Park as an “incomprehensible and outrageous lunatic.”

“It is the consensus evaluation of the nation that the destructive end of Park Geun-hye is the historical victory of the justice of the people,” the unnamed spokesman for North Korea’s National Reconciliation Council said in a statement on KCNA, North Korea’s official state news agency.

‘Executed by the people’

Park “was judged and executed by the people, not by certain political force or the opposition force,” the spokesman said.

“South Korean society now stands at the important crossroads of revolution. South Koreans’ anti-Park vigil has won, but this is only a beginning of the fight to realize true justice and social progress.”

Pyongyang also weighed in on the impeachment in a Saturday editorial from Rodong Sinmun, a state-run media outlet.

“Park Geun-hye is an ignorant and uncouth dictator who squandered the taxpayer’s precious money for her own complacency and pleasure,” the piece read. “How pathetic is her wretched life.”

The Korean Peninsula remains divided and technically at war despite an armistice that ended hostilities between the forces of the communist China-backed North and anti-communist, US-backed South in 1953.

The next day, Seoul said the first pieces of the US-built Terminal High Altitude Area Defense (THAAD) — a defensive missile system opposed by China — had arrived in South Korea.

Park and her conservative allies have taken a more hard line position on North Korea, while the left-wing opposition has signaled it would be likely to pursue a policy of engagement with Pyongyang.

The corruption scandal that brought down Park has dominated South Korean politics for months.

The President was accused of being unduly influenced by her longtime friend and adviser, Choi Soon-sil, who is on trial for abuse of power and fraud.

The Constitutional Court on Friday agreed with accusations that Park had abused her authority in helping Choi raise donations from companies for foundations she had set up.

Three people died in violent protests that broke out in Seoul after the court’s ruling.

Pro-Park groups staged an angry demonstration outside Seoul City Hall early Saturday and there was a heavy police presence in the capital.

However, thousands took to the streets to celebrate, with a giant rally on the historic Gwanghwamun Square.

According to the Yonhap news agency, more than 70% of Koreans support Park’s impeachment.

Emotional scenes at her home

At Park’s private home, where she arrived Sunday, many of her supporters were in tears as they chanted, “Take back the impeachment” and “Park Geun-hye, we love you.”

Police presence was high but the crowd was mostly calm, with no signs of a repeat of Friday’s violence. One protester shouted, “Cheer up. President!”

There were occasional outbursts of anger, particularly directed at the Korean-language press. Demonstrators accused of them being “fake news” and called them “candles,” in reference to the weekly candlelit vigils which helped oust Park.

Prosecutors are expected to begin interrogating Park as early as Monday on corruption charges, and may seek to block her from leaving the country, according to Korean broadcaster YTN.

An election for Park’s replacement must be held within 60 days. Park Geun-hye’s Liberty Korea Party will announce its candidate for President on March 31, the party said Sunday.

Experts predict the election will take place May 9.

With Park’s ruling conservatives looking out of favor, it seems likely the country will turn to the left.