LAS VEGAS — NFL star Michael Bennett was not singled out nor detained because of his race during an incident that occurred in Las Vegas after a major prizefight last month, Sheriff Joseph Lombardo told reporters Friday.

Lombardo said the Seattle Seahawks defensive lineman — who has alleged a police officer pointed a gun at his head and threatened to shoot him — was held because of his actions in the aftermath of a reported shooting stood out.

As for the allegation that members of the Las Vegas Metropolitan Police Department used a pointed gun while detaining Bennett, the sheriff said: “There is no evidence that this happened.”

In one of several police body cam videos released Friday, Bennett, who is in the back of a patrol car, complains that his cuffs are too tight, and when officers come to loosen them he says an officer pointed the gun at his head while he was on the ground. An officer heard on the video says no one did so.

Bennett says, “The other officer did, sir.” It is unclear which officer Bennett is referring to in the video.

In another video he says an officer had the gun to the back of his head and was “saying he’s going to blow my head off.”

“We have not been able to confirm that statement,” Lombardo said, adding that the officer could be heard giving Bennett profanity-punctuated orders to move his arms and hands.

The detaining officer failed to activate his body camera and could be subject to disciplinary action, the sheriff said. That officer did have his weapon drawn, video shows.

Bennett’s attorney disputed that the videos released Friday rule out race as a factor.

“It does not disprove in any way what Michael Bennett says happened to him,” John Burris told CNN. “He was a large black man running away from what he thought were gunshots, as were many others, and there was no lawful basis for him being detained.”

Bennett is 6-foot-4 and weighs 274 pounds, according to the NFL.

“The video confirms what happened and we don’t dispute that. We disagree with the conclusions,” Burris said.

Earlier this month, the 31-year-old Bennett was extremely emotional when he gave his version of the events that followed the August 26 fight between Conor McGregor and Floyd Mayweather Jr.

“I’m just lucky to be here to be able to speak about it. At any moment, I could’ve made the wrong decision whether to move, or (if police) felt like I was resisting or doing something wrong, and the Seahawks would be wearing the patch with No. 72 on it,” he said, referencing a common way NFL teams memorialize players.

Bennett spoke to reporters in early September after tweeting an open letter alleging mistreatment by police.

Two officers who detained Bennett were Hispanic and a third was black, Lombardo said, disputing the accusation that the detention was racially motivated.

Bennett’s actions stood out from other people, Lombardo said. The sheriff added that two other patrons were detained. They also were minorities.

In one video an officer explains to Bennett that he drew suspicion because, as officers shouted for people to stay down and not move, he started running. Bennett tells an officer he ran because someone said to run.

The NFL player was detained for about 10 minutes until police determined there was no shooting, the sheriff added.

Lombardo said authorities reviewed 800 videos from that night from multiple sources including surveillance cameras, individuals recording on cell phones and police body cams. About a quarter of those were pertinent to a police investigation, .

A video of the incident released earlier this month begins with Bennett facedown on the ground outside a casino, an officer cuffing Bennett’s hands behind his back.

“I wasn’t doing nothing, man,” Bennett implores in the video. “I was here with friends. They told us to get out. Everybody ran. Can you answer my question, sir?”

There was no shooting; Lombardo said some stanchions holding up ropes to set up lines were knocked on tiled floor.

In his letter, Bennett said his daughters, Peyton, Blake and Ollie, were on his mind as he was being stopped for “being a black man in the wrong place at the wrong time.”

“All I could think was, ‘I’m going to die for no other reason than I am black and my skin is somehow a threat.’ My life flashed before my eyes as I thought of my girls. Would I ever play with them again? Or watch them have kids? Or be able to kiss my wife again and tell her I love her?” he wrote. 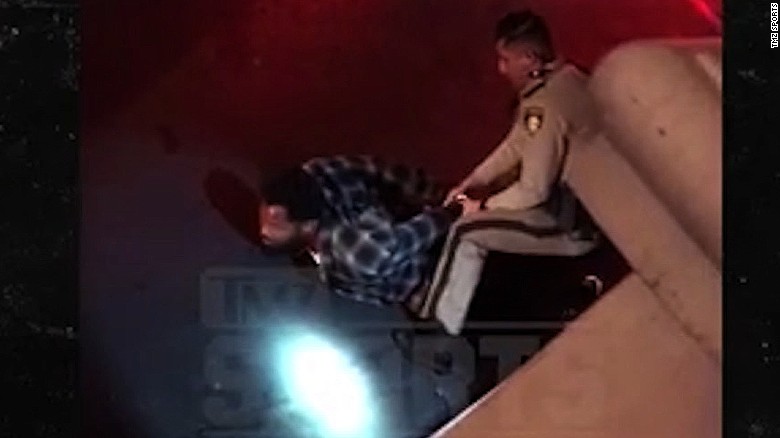 One officer made it hard for him to breathe by putting a knee in his back, he wrote. His fingers went numb during his detention because of the handcuffs being too tight, Bennett said.

He said he asked officers why he was being held, but they never answered him.

In the videos, police officers explained to Bennett they thought they had an active shooter and didn’t have time to have a conversation with him after they chased him.

Bennett, in his open letter, wrote: “Equality doesn’t live in this country and no matter how much money you make, what job title you have, or how much you give, when you are seen as a ‘Nigger,’ you will be treated that way.”

Bennett, a two-time Pro Bowl selection, is considering a federal civil rights lawsuit against the officers, Burris said earlier this month, calling the incident “Exhibit A as to how every black man rich, famous or poor, unarmed and innocent, can be falsely detained, arrested or even shot and killed by the police.”

(NEXSTAR) — Heading into Week 3 of the NFL season, "Big Game Bound" looked at two marquee matchups: the Kansas City Chiefs vs. the Baltimore Ravens and the Green Bay Packers vs. the New Orleans Saints.

The news was announced by the Pro Football Hall of Fame. There is no word on a cause of death..

All 12 Playbook: OSU, Baylor prepare to kick off season openers

The All 12 Playbook show will live stream Thursdays at 3:30/2:30c. At times it can take a few moments for the stream to begin.

OKLAHOMA CITY (KFOR) - The 2020 Big 12 football season continues this weekend with a light schedule of just two games, and All 12 Playbook will preview those games as well as wrapup the season openers from the previous weekend.